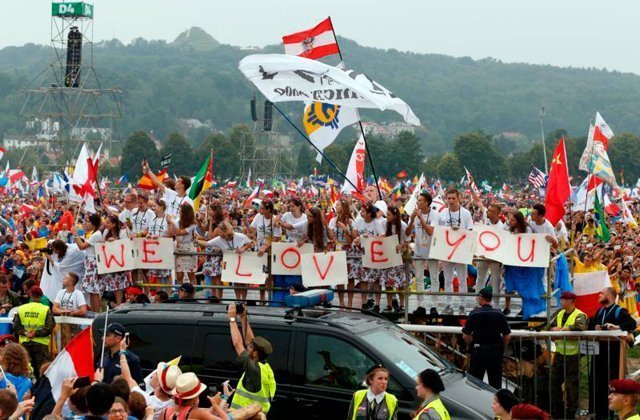 KRAKOW, Poland (CNS) — The youthful face of God’s mercy can change the hearts of people who have lost hope, Pope Francis said.

A young person who is touched by Christ is "capable of truly great things," the pope told thousands of young men and women July 28 at the welcoming ceremony of World Youth Day in Krakow.

"Today the church — and I would add, the world — looks to you and wants to learn from you, to be reassured that the father’s mercy has an ever-youthful face and constantly invites us to be part of his kingdom," the pope said.

Arriving at Blonia Park in his popemobile, Pope Francis was enveloped in a sea of red, yellow and blue as pilgrims donned brightly colored ponchos to shield them from the rain.

Taking his seat on the main stage, the pope was welcomed by Cardinal Stanislaw Dziwisz of Krakow and six young men and women representing Europe, Asia, North America, South America, Africa and Australia.

After presenting the pope with a custom pilgrim’s backpack, a group of young performers from around the world entertained the pope and the crowd by dancing traditional dances. The dances ranged from a young Indian woman swaying to the tune of sitar to a couple masterfully dancing to tango music.

Following the Gospel reading, the pope thanked the youth for their presence, greeting them warmly saying, "At last, we are together."

Encouraging them to cheer for St. John Paul II, the pope thanked his predecessor for initiating World Youth Day.

"From heaven, he is with us, and he sees all of you: So many young people from such a variety of nations, cultures and languages, but with one goal: that of rejoicing that Jesus is in our midst," he said.

The pope noted the festive atmosphere of World Youth Day and praised the "enthusiasm, dedication, zeal and energy" of the young men and women who make God’s love palpable to the world.

However, while extolling the virtues of a young, merciful heart, the pope also lamented young people "who seem to have opted for ‘early retirement.’"

"It worries me to see young people who have ‘thrown in the towel’ before the game has even begun, who are defeated even before they begin to play, who walk around glumly as if life has no meaning," he said.

Deep down, he added, "young people like this are bored and are boring."

The celebration in Poland, the pope continued, offers an opportunity for young men and women to help each other and "not be robbed of the best of ourselves."

Pope Francis encouraged the youths to look to Jesus to receive a "true passion for life" and to "give the very best of ourselves."

"Are you looking for empty thrills in life, or do you want to feel a power that can give you a lasting sense of life and fulfillment? Which one do you want: empty thrills or the power of grace? To find fulfillment, to gain new strength, there is a way. It cannot be sold, it cannot be bought, it is not a thing, nor an object. It is a person: His name is Jesus Christ," the pope said.

He also invited them to dedicate their time in Poland to listening to Jesus and to each other in order to live a full life and to embark "on the adventure of mercy."

"Here we are, Lord! Send us to share your merciful love," Pope Francis prayed. "We want to affirm that our lives are fulfilled when they are shaped by mercy, for that is the better part and it will never be taken from us."