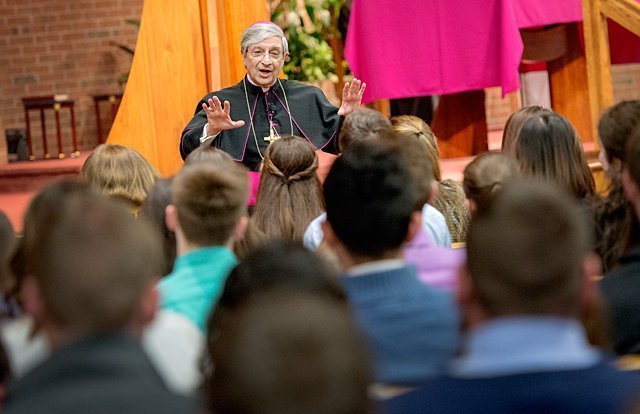 Bishop Salvatore R. Matano speaks directly to the Class of 2016 during the Hands of Christ Awards at St. Lawrence Church March 1, 2016.

My dear brothers
and sisters in Christ:

In the next several weeks, I will celebrate events with the youth of our diocese. These events are always impressive and a source of renewed hope now and into the future. At the writing of this message to you, I am preparing to concelebrate Masses at the Basilica of the National Shrine of the Immaculate Conception in Washington, D.C., in conjunction with the March for Life, January 26-27, 2017, at which thousands of young people, our diocesan youths among them, will raise their voices in prayer invoking the Lord’s assistance in the proclamation of the sanctity of all human life from the moment of conception until natural death. With joy and enthusiasm, and with the vibrancy of youth, our young people both understand and cherish the right to life.

At the beginning of this month, we honor our Catholic schools and the dedicated parents, pastors, principals, faculties and staff who work so very hard to provide a Catholic education for our children and young adults. Their presence at the Masses celebrated during Catholic Schools Week affirms the centrality of Jesus Christ in every person’s human, personal and spiritual development as He is the Way, the Truth and the Life. What a joy it always is to speak to these young people about our treasured gift of faith.

During this same month, our scouts in our Catholic Scouting programs will receive religious emblems. At the ceremony, I remind them of the Scout Law, namely that a scout is: trustworthy, loyal, helpful, friendly, courteous, kind, obedient, cheerful, thrifty, brave, clean and reverent ‚Äì all virtues so consistent with the Christian way of life. Once again, how impressive it is to see our youths making decisions that reinforce their union with the Lord. And in our religious-education programs, committed faith formation directors and teachers are regularly encouraged by young people seeking to know Jesus.

Our young people are so willing to help others. On February 7, 8, and 9, the Hands of Christ Award will be given (at St. John the Evangelist Church, Greece; St. John of Rochester Church, Fairport; and St. Mary Our Mother Church, Horseheads, respectively) to several hundred high school seniors who have been the “Hands of Christ” in their parishes, in their families, neighborhoods, schools and communities, to their peers, to those in need, to those needing the support of Jesus.

Each recipient of this very special recognition:

¬∑ “Has consistently demonstrated a Christian attitude by word and example.

¬∑ Has been actively involved in the parish as well as their school or community.

¬∑ Has been a positive role model to their peers, younger children and adults.

¬∑ Is a practicing Roman Catholic in a parish in the Diocese of Rochester and attends Mass.

These young women and men are excellent examples to the adult community, as well as to their peers, of what it means to live by the Gospel and to be a disciple of the Lord. These young people, please God, will be among our future leaders in the church and in society. I pray that from among this impressive group, young men will discern a vocation to the priesthood and young women to the religious life. The generosity, charity, social consciousness and deep faith of these young sisters and brothers are true sources of encouragement for us all.

How often we hear complaints about youth and yet so many of them do their best to follow a virtuous life in a world that too frequently fails to give them positive examples. These young people are immersed in a world badly scarred by hatred, division, violence and corruption. Yet they stand up for the dignity of human life, they serve this life and they work to protect this life. For example, McQuaid Jesuit High School this month hosts the annual “Break for Life,” which supports students throughout the diocese in their efforts to understand and to embrace God’s gift of life. Once again, it will be my privilege to offer the closing Mass of this day on February 11, 2017.

In his address at the World Youth Day Prayer Vigil this past July 2016 in Krak√≥w, Poland, Pope Francis said to the youths who gathered in great numbers:

I pray our young people will answer positively.

Throughout the history of our church, young people have been recognized for their heroic virtue and declared blessed or saints by the church. Blessed Pier Giorgio Frassati died at the age of 24 on July 4, 1925, having contracted polio. An athletic young man, Pier Giorgio had many friends, many who were poor and assisted by Pier Giorgio. Only at his funeral did his parents become aware of so many mourners unknown to them but known to their son who helped them because in them Pier Giorgio saw the face of Christ.

As a young novice in the Society of Jesus, St. Stanislaus Kostka was recognized by his religious superiors as being a model religious whom the Lord called to Himself on August 15, 1568, when Stanislaus was 17 years old, the victim of serious illness exacerbated by high fevers. Joined to the Lord for all eternity, he would now gaze upon the Lord whom he so fervently adored in the sacrament of the most holy Eucharist.

Born the daughter of a king, St. Elizabeth of Hungary eschewed the life of nobility and royalty, choosing to live a simple life devoted to caring for the poor. Her beloved husband of six years, Louis of Thuringia, died in the Crusades. Elizabeth, although deeply saddened, continued lovingly to care for her children and extended this loving care by aiding the poor and building a hospital where she herself ministered to the patients. She returned to the Lord on November 17, 1231, not yet 24 years of age.

Beloved by many is St. Th√©r√®se of Lisieux (the Little Flower), who at the age of 15 entered the Discalced Carmelite community in Lisieux, France. Known for the depth of her spirituality, which so deeply united her to her spouse, Jesus Christ, she was able to assist others in meeting the Lord and “was a highly influential model of sanctity for Catholics in the first half of the twentieth century because of the simplicity and practicality of her approach to the spiritual life” (Richard P. McBrien, The Pocket Guide to the Saints, p. 399). Her spiritual memoir, The Story of a Soul, is well known to many. On October 19, 1997, St. John Paul II declared her a Doctor of the Church. St. Th√©r√®se was only 24 years old when she died on September 30, 1897.

These are only some of the young people who have been declared blessed or saints at a youthful age. Our youths are capable of extraordinary accomplishments. What they need is our encouragement and, above all, our prayers and good example: the practice of our faith and the example of our lives lived in union with Jesus Christ. The family, the “domestic Church,” is the first place that a child’s faith is nurtured. In his encyclical letter Lumen Fidei (The Light of Faith), Pope Francis wrote:

“In the family, faith accompanies every age of life, beginning with childhood: children learn to trust in the love of their parents. That is why it is so important that within their families parents encourage shared expressions of faith which can help children gradually to mature in their own faith. Young people in particular, who are going through a period in their lives which is so complex, rich and important for their faith, ought to feel the constant closeness and support of their families and the Church in the journey of faith” (Number 53).

In this year 2017 recently begun, I pray that our young people will grow in wisdom, knowledge and faith, a faith that finds its heart in the celebration of the most holy Eucharist, the holy sacrifice of the Mass.

Invoking the intercession of the Holy Family and these young saints now with the Lord, I remain

The Most Reverend Salvatore R. Matano