GATES -- Ashley Turcotte had never been to the National Catholic Youth Conference before. The high-school junior had talked with other youths who had attended, but she didn't really know what to expect.

"I feel like everyone tells you something and you are like, 'Oh, we will see,' she remarked. "But it was just as much as what they all said it would be."

Amazing and life-changing were just some of the words Ashley used to describe her pilgrimage to NCYC, held Nov. 19-21 in Indianapolis. Despite having traveled all night long, she and the rest of the youths from the Gates Catholic Community and Our Mothers of Sorrows in Greece were filled with excitement as they stepped off the bus early in the morning on Nov. 22 at St. Jude Church in Gates.

The teens were among the approximately 500 diocesan youths who spent three days sharing and growing in their faith with more than 23,000 Catholic high-school students from around the country. The biyearly conference featured a mixture of keynote presentations, workshops and Mass. There also were concerts from such well-known Christian and Catholic artists as Matt Maher and For King and Country. The youths also had the opportunity to participate in reconciliation and adoration of the Blessed Sacrament. A thematic park, which consisted of interactive games, sports and recreational activities, allowed the youths to have some fun and relax too. 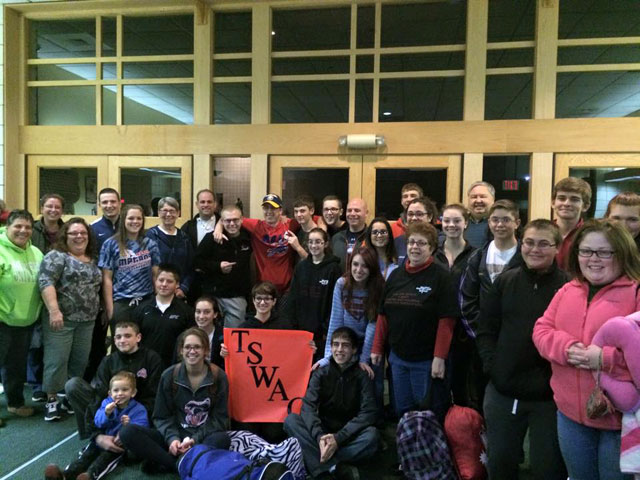 Courier photo by Gina Capellazzi
Youth and chaperones from the Gates Catholic Community and Our Mother of Sorrows Parish in Greece take a photo before boarding the bus to Indianapolis Nov. 18

Serina Justiniano, a high-school senior and member of the Gates Catholic Community, attended NCYC in 2013. She said it was a lot different attending the conference for a second time.

"I was more open. My heart was more open to the experience. I was closer to this group, and I trusted everyone a lot more, so it made it a better experience," she explained.

Serina said her favorite part of the conference was meeting singer/songwriter and speaker Jackie Francois Angel, who was one of the hosts during the event. Serina said Angel has helped her a lot in her life and with her faith.

"I got to thank her," she said. "She personally signed my CDs and shirts. She was amazing. That was the best part."

For Breanna Dauphinee, her favorite part of the conference was the adoration of the Blessed Sacrament on Friday afternoon.

It was just moving," Breanna, a member of Our Mother of Sorrows Church, explained. "By the end of it, I was just sitting there crying."

Breanna also enjoyed meeting youths from all over the country. She said she met at least one person from all 50 states and had fun having them sign her shirts.

Youths and their chaperones alike said they were changed by the NCYC experience. First-time chaperone Cathy Larson of Gates Catholic Community, who attended the conference with her son, John, said from the opening ceremony to the closing ceremony, everything was so faith-filled that you couldn't help but to participate in everything the conference had to offer.

"It was amazingly life-changing," Larson remarked. "I made memories that I wouldn't trade for a million years." 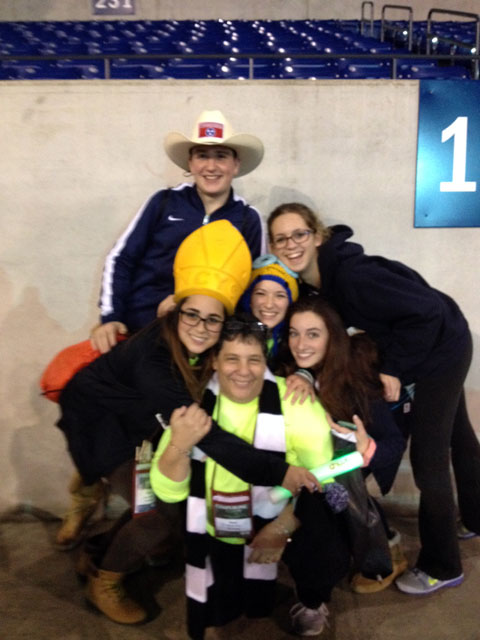 Larson enjoyed seeing the teens being so opened and free in their faith, including the young men of the group who were brought to tears sharing their personal stories with their peers. She said an unbelievable bond was created among the youths during the three-day conference.

Larson's roommate for the conference was fellow chaperone Abby Curatolo. Unlike Larson, Curatolo had been on the other side of the event before, attending NCYC as a teenager in the 1990s. Now as a young adult, she volunteered to be a chaperone and travel with the Gates Catholic Community youths. Attending the conference as a chaperone was a completely different experience, Curatolo said.

"Everything about it was very reminiscent to how my youth group had been," she added."But being the chaperone and seeing the youth go through it was different. We had an amazing group of kids and it just made that experience that much better."

That experience is something the youths said they won't forget.

"I now feel like my heart is relit and I can actually see God now. I’ll always remember that," Serina said.

"It is not just getting up, rolling out of bed and going to church," Ashley added. "I am on journey. My faith journey."