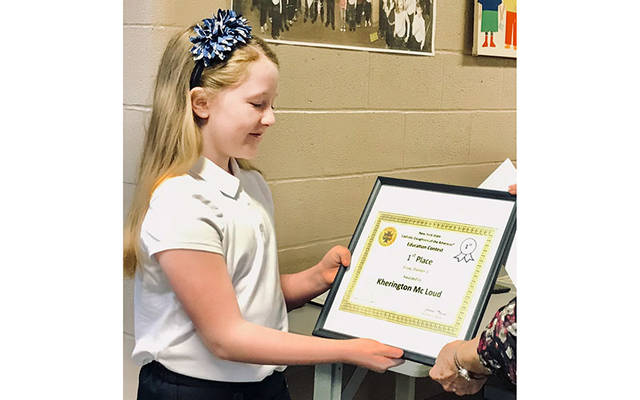 Last night, I had the pleasure of interviewing 10-year-old Kherington McLoud. As you will read in the Catholic Courier and on our website later this summer, Kherington recently placed first in her division in both the local and state portions of the Catholic Daughters of the Americas’ annual essay contest. The essay she wrote a few months ago has now been entered into the organization’s national contest.

Kherington impressed me in several ways. First of all, I believe the essay she wrote is phenomenal. She hopes to become an author one day, and as I told her last night, I have no doubt that I will be seeing her name on published works in the future. And not only is she talented, but she enjoys writing, too. Her award-winning essay was penned as a class assignment, but she often writes in her free time as well.

Talking with Kherington brought back long-forgotten memories of my own elementary-school days, when I would fill spiral-bound notebooks with fiction stories and journal entries alike. In fact, when I was around her age, I also wrote a winning essay for the CDA contest, although mine only won at the local level.

I mentioned this to Kherington during our conversation last night. I don’t really know why, maybe to build rapport with her as we talked, or maybe to inspire her to keep writing. Instead, however, Kherington inspired me. She surprised me by congratulating me on my own winning essay from years ago, and that was just the first of several times during the conversation when I was as impressed by her genuine concern for others as I was by her love of writing and her natural talent.

Our conversation was a source of joy in the midst of a challenging day. Thank you, Kherington!

Burke is a staff writer for the Catholic Courier.