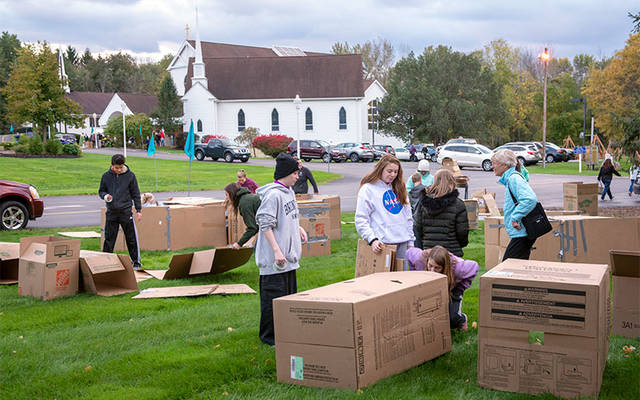 Youths from St. Catherine of Siena Church in Mendon and St. Patrick Church in Victor camp on the grounds of the Mendon church Oct. 13 using shelters made from cardboard boxes. (Courier photo by Jeff Witherow) 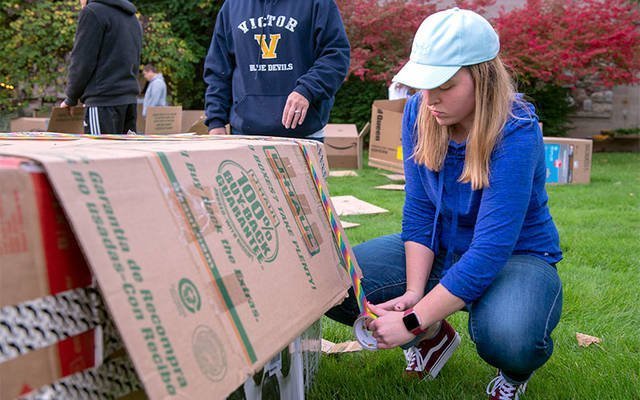 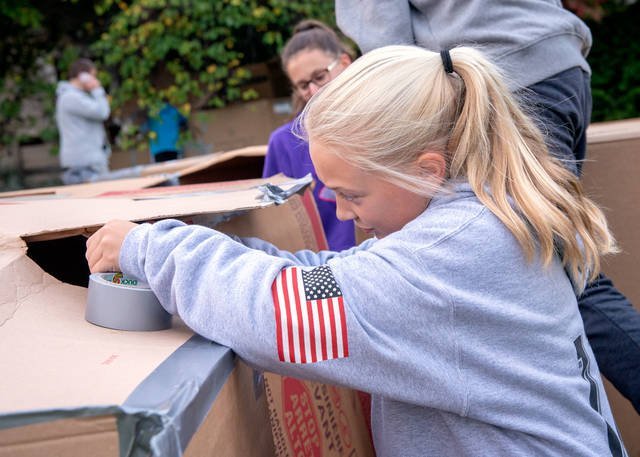 MENDON — Though western New York had seen summer-like warmth early in the week of Oct. 7, the autumn chill had returned by the weekend, just as teens from two area parishes prepared to spend the night outdoors.

The weather on Oct. 13 may have been seasonally typical, but the camp-out that evening was anything but ordinary for the youths from St. Catherine of Siena Church in Mendon and St. Patrick Church in Victor. The teens spent almost 12 hours outside in cardboard boxes that they had erected on the front lawn of St. Catherine of Siena Church to raise awareness of homelessness in Rochester and surrounding communities.

The idea for the “cardboard city” project originated with Karen Luke, pastoral associate of Christian formation and youth ministry at St. Catherine, after her parish had purchased 100 sleeping bag coats over the summer for the House of Mercy homeless shelter in Rochester.

“We (as a church community) always talk about things, and we raise money to purchase things, but then there is never the action part and experiential part,” she said, explaining why she organized the project.

Luke put out a call on Facebook to other diocesan youth ministers to see if anyone would be interested in participating in the project with her youth group. Kristen Leschhorn, youth and young-adult minister at St. Patrick in Victor, responded that she wanted to get her youths involved.

The two youth ministers decided the project would be an annual event conducted in September, “but we decided to do it (the inaugural event) in the middle of October to make it a little more real and have them (the youths) really be exposed to the elements of the cold,” Leschhorn noted.

Seventeen middle-school and high-school teens signed up to participate, and each were responsible for raising a minimum of $50 for a spot on the lawn of St. Catherine’s, which Luke referred to as “lot rent.” That money was to be distributed to two community organizations, RAIHN (Rochester Area Interfaith House Network) and Family Promise of Ontario County.

“We thought it would be cool instead of doing just one organization that we would both foster the organizations that we already work on in our own parishes,” Luke explained, noting that St. Catherine parishioners visit RAIHN every other month and that St. Patrick is involved with Family Promise of Ontario County.

The cardboard city evening began with the youths constructing their cardboard homes out of boxes that Luke and Leschhorn collected over the past few months.

Eighth-grader Dylan Feszczyszyn and his friends, Conlan Rorick and Preston Yates, built their homes underneath a nearby tree.

“We just got there (to the site) as quickly as we could and decided to use it (the tree) as some cover,” Dylan, of St. Catherine, told the Catholic Courier the evening of Oct. 13. “We made a giant box, and we kind of did this so that we could keep each other warm.”

“I’m just worried about the wind, as I don’t want it to knock my shelter over,” said Eric Baron, 17, of St. Patrick, as he set up his cardboard home Oct. 13. “I don’t want the wind to seep in, so I was kind of trying to tape around all the cracks and edges. I think I should be warm enough.”

After the teens had established the places where they would spend the night, they went indoors for a soup and bread supper and to learn about the plight of the homeless from James Murphy of St. Joseph’s House of Hospitality in Rochester. The youths later returned outdoors with only the clothes on their backs, their toothbrushes and their sleeping bags.

“I wanted it to be authentic as possible,” Luke said, noting that each youth received a homeless kit containing a bottle of water, a bag of chips, candy and hand warmers.

Luke said parents and parishioners also secretly dropped off “good Samaritan bags” for distribution to the teens during the night. The bags contained such items as blankets, sweatshirts, cookies and apples.

Following the experience, Luke told the Catholic Courier that all of the youths stayed in their homes the whole night and then debriefed about the experience as a group Oct. 14 before attending Mass together and leading a middle-school youth-group session about their experiences.

“The kids are still talking about it. They didn’t realize that homelessness was so close to their homes. It opened their eyes that it isn’t just a problem somewhere else,” Luke said.

“You never think about how it would be to spend the night homeless. It is kind of like putting yourself in their shoes. It is a different experience than I usually do,” Eric added.