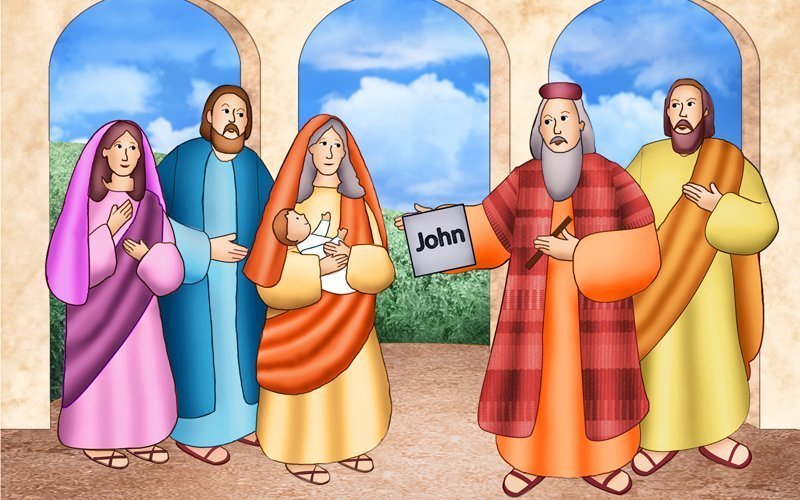 One day, as Zechariah the priest entered the sanctuary of the Lord to burn incense, the angel Gabriel appeared to him.

“Your prayer has been heard,” Gabriel told Zechariah. “Your wife Elizabeth will bear you a son, and you shall name him John.”

Zechariah did not believe what he had heard. He and his wife were very old, and Elizabeth couldn’t have children.

Gabriel did not appreciate Zechariah’s doubt.

“I was sent to speak to you and to announce to you this good news. But now you will be speechless and unable to talk until the day these things take place, because you did not believe my words, which will be fulfilled at their proper time,” he said.

And just as the angel said, Zechariah suddenly could not speak. When he came out of the sanctuary, everyone who had been waiting for him outside knew he had seen a vision.

Zechariah fulfilled his priestly duties and then returned home. Not long after, Elizabeth became pregnant, just as Gabriel had said.

The time finally came for Elizabeth to have her baby. And just as the angel Gabriel had said, she gave birth to a boy.

On the eighth day, the time came to have the baby circumcised. Those who gathered with Elizabeth and Zechariah for the circumcision expected the baby to be named after his father, as was the custom.

“No. He will be called John,” she said with certainty.

The people attending the circumcision were shocked.

“There is no one among your relatives who has this name,” they said as they turned to consult with Zechariah.

They made signs to Zechariah, asking him what the baby’s name should be. Zechariah then asked for a tablet to write upon.

“John is his name,” Zechariah wrote, and everyone was amazed.

Just then, Zechariah regained his speech and immediately started to praise God.

Those gathered were afraid, and what happened became the talk of Judea.

“What, then, will this child be?” people wondered of John, whom we know by the name John the Baptist.

READ MORE ABOUT IT:
Luke 1

Q&A
1. To whom did the angel Gabriel appear?
2. Why were people shocked that the baby was named John?

Zechariah was not the only person to whom the angel Gabriel appeared in Luke 1.

In Luke 1:26-38, we read that God sent Gabriel to tell Mary that she would be the mother of Jesus.

“Do not be afraid, Mary, for you have found favor with God,” Gabriel told Mary. “Behold, you will conceive in your womb and bear a son, and you shall name him Jesus. … The Holy Spirit will come upon you, and the power of the Most

High will overshadow you. Therefore the child to be born will be called holy, the Son of God.”

Mary’s reaction to Gabriel’s message was much different than Zechariah’s. While Zechariah expressed doubt, Mary accepted what she had been told.

“Behold, I am the handmaid of the Lord. May it be done to me according to your word,” she said to the angel.

Afterward, Mary visited her cousin, Elizabeth, who was six months pregnant with her son, John the Baptist.

Elizabeth praised Mary for her belief.

“Blessed are you who believed that what was spoken to you by the Lord would be fulfilled,” Elizabeth said.

Elizabeth of Portugal was born in 1271 in Spain. She was the daughter of the king of Aragon as well as the niece of St. Elizabeth of Hungary, for whom she was named.

At age 12, she married King Diniz of Portugal and worked to found hospitals, orphanages and a home for women.

She was known as a peacemaker, helping to avert wars and to heal a rift between her husband and her son.

After her husband died in 1325, she moved to a Poor Clare convent she helped to found and spent the rest of her days devoted to God and those in need.

She died in 1336 as she was trying to bring peace between two kings, her son and her nephew. We honor her on July 4.