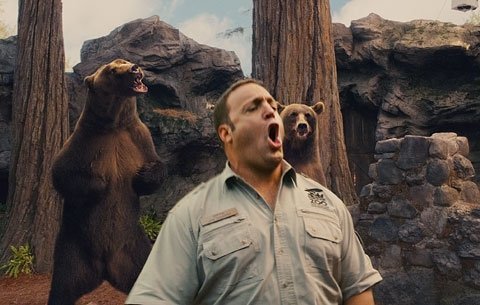 NEW YORK (CNS) — We have it on the authority of Simon and Garfunkel that "it’s all happening at the zoo." Unfortunately, not much of any consequence — or entertainment value — transpires within the confines of the scattershot, sometimes earthy comedy "Zookeeper" (Columbia/MGM).

In fact, neither director Frank Coraci nor anybody else involved in this ill-matched crossbreeding of romance and fantasy seems certain whether it’s intended to be fish or fowl, and so it succeeds in being neither. Too mushy — and occasionally too mature — for kids, this Kevin James vehicle is too sloppy to satisfy their discerning elders.

James, who also co-wrote the script with no fewer than four collaborators, plays Griffin Keyes, a likable schlub whose enthusiasm for his work as an attendant at Boston’s Franklin Park Zoo helps blunt the pain of his empty personal life.

As we learn from the opening scene, five years ago, Griffin suffered a terrible humiliation when Stephanie (Leslie Bibb), his attractive but shallow girlfriend, broke up with him just as he was down on one knee proposing to her. And why? Because, by her lights, taking care of animals for a living is icky and lacks style.

Flash forward to the present where, for no very apparent reason, a family wedding brings Stephanie back into the mix. Still smitten, Griffin wonders aloud if he should quit his job to win Stephanie back.

The mere mention of such a possibility sends Griffin’s four-legged, furred and feathered friends into a panic as a result of which we discover — as Griffin himself does soon after — that they speak fluent human.

The first few minutes of their dialogue are amusing enough, since the personalities they now display range from a soul-sister giraffe (voice of Maya Rudolph) to a comically kibitzing yiddisher monkey (voice of Adam Sandler).

We’re also eventually introduced to a temporarily depressed but fun-loving gorilla (voice of Nick Nolte) who becomes Griffin’s boon companion on a kick-over-the-traces evening at — and extended commercial for — T.G.I. Friday’s. (The fact that the bond thus formed serves as one of the film’s emotional fulcrums is not a good sign.)

As Griffin becomes the recipient of "Wild Kingdom"-style mating advice from the animals, things take a less-than-family-friendly turn. Under the tutelage of the zoo’s resident wolf, for instance, Griffin tries to "mark his territory," but is suddenly interrupted by his colleague Kate (Rosario Dawson) who — amid his frantic fumbling — gets an unwanted eyeful.

At another point, a duo of bears urges Griffin to walk in such a way as to draw attention to what they refer to as his "pudding cup."

Then there’s the incident in which, temporarily paralyzed by one of the reptiles with which he works, Griffin’s associate Venom (Ken Jeong) invites Griffin to rummage around in his front pants pockets to locate his car keys. Venom’s reaction to this encounter is weird at best.

Meanwhile we wait for Griffin to catch on to the fact, long since surmised by viewers, that the gal he ought to be pursuing is not materialistic Stephanie (with whom, however, we see that he has not only reconciled but also shacked up). Rather, of course, it’s caring, animal-loving, bright-as-a-button Kate.

Despite the elements listed below, "Zookeeper," while not suitable for children, is probably acceptable for mature teens.

The film contains cohabitation, brief implied frontal nudity, some scatological and restrained sexual humor and a couple of mildly crass terms. The Catholic News Service classification is A-III — adults. The Motion Picture Association of America rating is PG — parental guidance suggested. Some material may not be suitable for children.