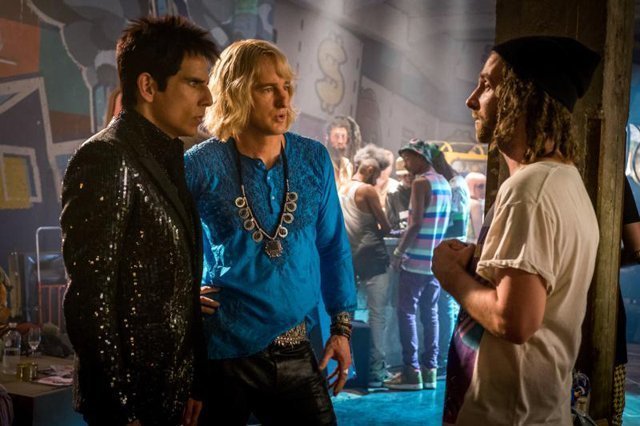 Ben Stiller, Owen Wilson and Kyle Mooney star in a scene from the movie "Zoolander 2." The Catholic News Service classification is O -- morally offensive. The Motion Picture Association of America rating is PG-13 -- parents strongly cautioned. Some material may be inappropriate for children under 13.
By Joseph McAleer
Catholic News Service
NEW YORK (CNS) — Some four decades ago, Steve Martin and Dan Aykroyd appeared on NBC’s "Saturday Night Live" as the Festrunk brothers, two self-billed "wild and crazy guys."
Flamboyant in dress and as dim as a pair of 40-watt bulbs, these memorable characters successfully diverted viewers for a few minutes at a time.
Flash forward and their would-be modern counterparts are Ben Stiller and Owen Wilson, who reprise their roles as outrageous fashion models in "Zoolander 2" (Paramount).
Unfortunately, what might be amusing as a brief sketch is stretched to a rather unfunny (and often crude) 102 minutes. Sex jokes and disrespectful references to religion abound. Believers, accordingly, will be as little tickled as Queen Victoria on a bad veil day.
Like its 2001 predecessor, the film is directed and co-written by Stiller. He also resumes his role as Derek Zoolander. As viewers of the original will remember, Derek once battled his blonde rival, Hansel McDonald (Wilson), for the title of world’s greatest male model, though the two wound up as friends.
Fifteen years have passed since the pals’ glory days, and both men have withdrawn from the fashion world. Derek is in seclusion, mourning the death of his wife, Matilda (Christine Taylor), and the removal of his son, Derek Jr. (Cyrus Arnold), to an orphanage. Unsurprisingly, Daddy has been deemed an unfit parent.
Hansel, on the other hand, has been busy with his principal hobby: participating in orgies with enthusiasts of both sexes.
The duo is drawn back into the fashion world by fetching Interpol agent Valentina Valencia (Penelope Cruz). "Someone is killing the most beautiful people in the world," she explains. The latest victim is Justin Bieber (playing himself), who’s been gunned down in Rome.
All of the deceased have died with an unusual expression fixed on their faces: a signature pout made popular by Derek.
That clue leads the team to top fashion designer Alexanya Atoz (Kirsten Wiig). She’s in the Eternal City mounting her runway show. Her intentions are evil, of course, and at her side is the dastardly villain of the first go-round, newly sprung ex-con Jacobim Mugatu (Will Ferrell).
The baddies are searching for the fountain of youth, and this is where "Zoolander 2" goes off the rails with a revisionist take on the Book of Genesis.
According to this hip updating of the Creation story, there was a third person in the Garden of Eden: "Steve," the first male model. He had the gift of eternal youth.
The search is on for Steve’s descendant, the "chosen one," since whoever drinks his blood will obtain everlasting life. The unlikely scion to whom the trail leads has both an unglamorous demeanor and a weight problem. The script — co-written with Justin Theroux, Nicholas Stoller and John Hamburg — uses this latter fact as the cue for numerous fat jokes.
Derek, Hansel and Valentina are alerted to the conspiracy by rock star Sting, who impersonates a priest and offers them the information in a confessional. Within the same sacred enclosure, Hansel goes on to quiz the singer about his legendary sex life.
None of this is remotely funny. And by the time Mugatu assembles the fashion industry’s movers and shakers (cameos by Valentino, Tommy Hilfiger and Anna Wintour, among others) in a mock religious ceremony involving images reminiscent of the Crucifixion, "Zoolander 2" has thoroughly outworn its tentative welcome.
The film contains sacrilegious humor, a frivolous treatment of religious themes and of human sexuality, some action violence and frequent crude and profane language. The Catholic News Service classification is O — morally offensive. The Motion Picture Association of America rating is PG-13 — parents strongly cautioned. Some material may be inappropriate for children under 13.
– – –
McAleer is a guest reviewer for Catholic News Service.
Copyright © 2022 Catholic News Service, Inc. All rights reserved. Linking is encouraged, but republishing or redistributing, including by framing or similar means, without the publisher's prior written permission is prohibited.