The newly ordained deacons kneel in prayer before Bishop Matano.

Bishop Salvatore R. Matano ordained three men to the permanent diaconate and two as transitional deacons on their way to the priesthood Aug. 15 at Sacred Heart Cathedral.

The ordination liturgy lasted approximately 90 minutes and took place on the Solemnity of the Assumption of Mary.

The deacon ordination had originally been scheduled for May 23 but was delayed by the coronavirus pandemic. A limited congregation was on hand at the cathedral Aug. 15 in keeping with current state COVID-19 restrictions on the sizes of public gatherings. However, many more people witnessed the ordination virtually via a livestream provided by the Catholic Courier.

Deacon  Johan Engström, 57, is among the three men who became a permanent deacon Aug. 15. Although he has served in parish ministry for many years, Deacon Engström said it took some time before he opened himself enough to hear God calling him to further ministry as a deacon.

“Responding to the call is all about being open. Life is continued discernment. … We’ve got to continue to say yes every day,” Deacon Engström said.

Deacon Engström grew up outside of Stockholm, Sweden, and first came to the United States in 1980 as an exchange student. He attended Penn Yan Academy and lived with a Catholic family whose members invited him to join them at Mass and other Catholic activities.

Shortly after returning to Sweden, Deacon Engström converted to Catholicism. Over the course of the next few years, he completed his Swedish compulsory military service, worked as a short-order cook at a truck stop, ran a flower shop, worked as a nurse’s aide in a hospital and created leadership-training materials for Catholic teens in Sweden.

He has worked in youth-ministry programs at Our Lady of Lourdes and St. Thomas More parishes in Brighton and St. Joseph Parish in Penfield, and currently serves as faith-formation director at St. Pius Tenth Parish in Chili. 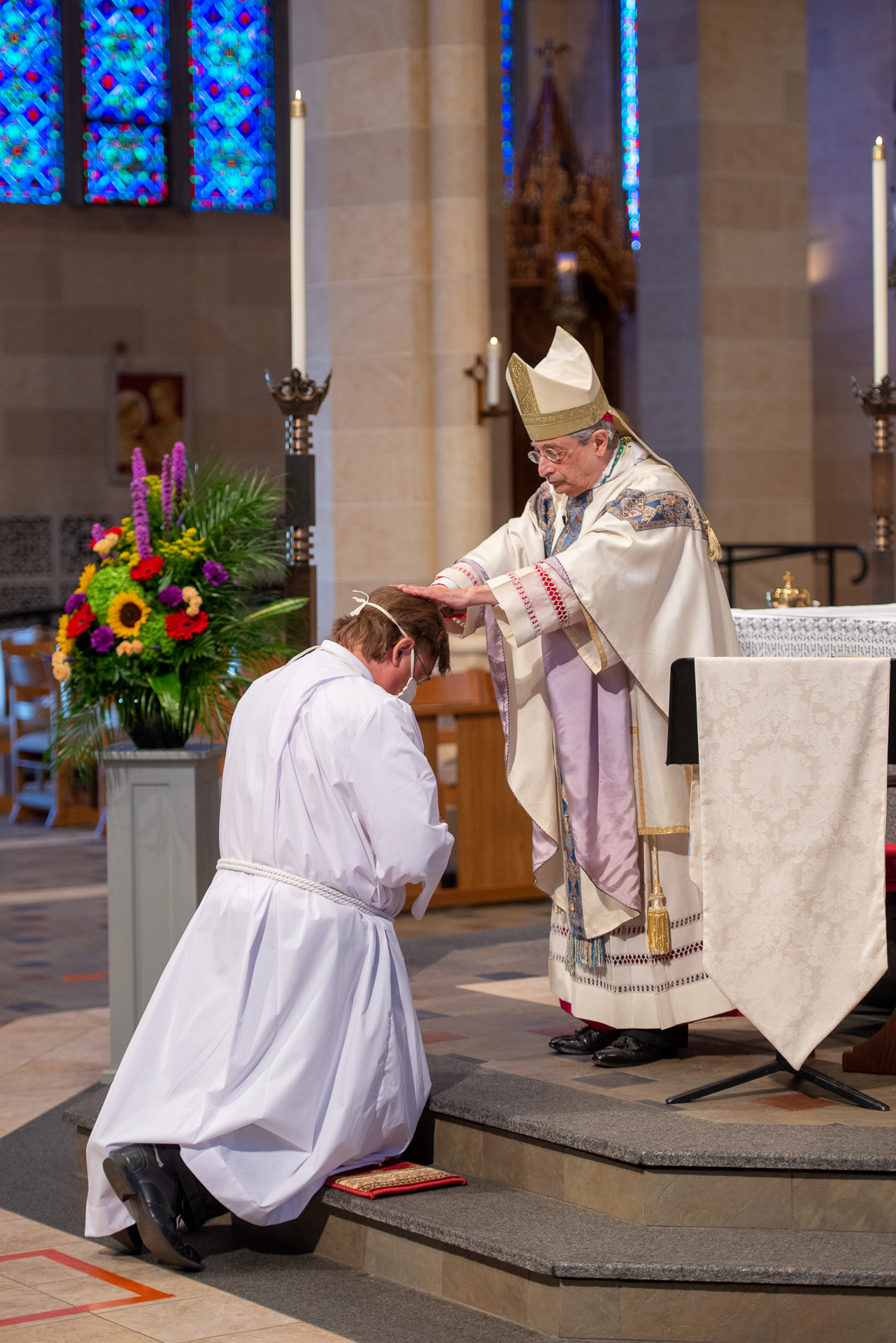 Bishop Matano places his hands on the head of Johan Engström. 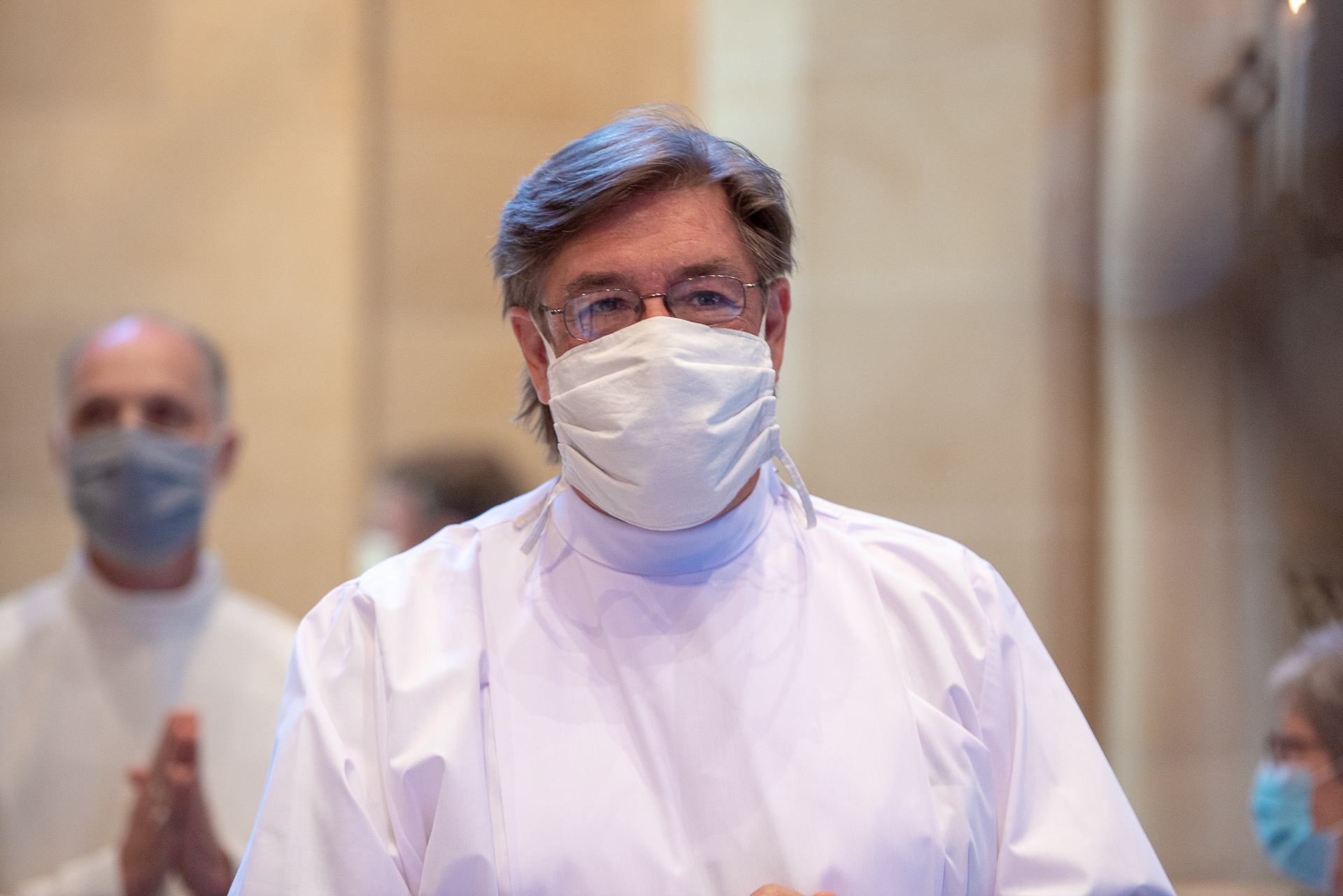 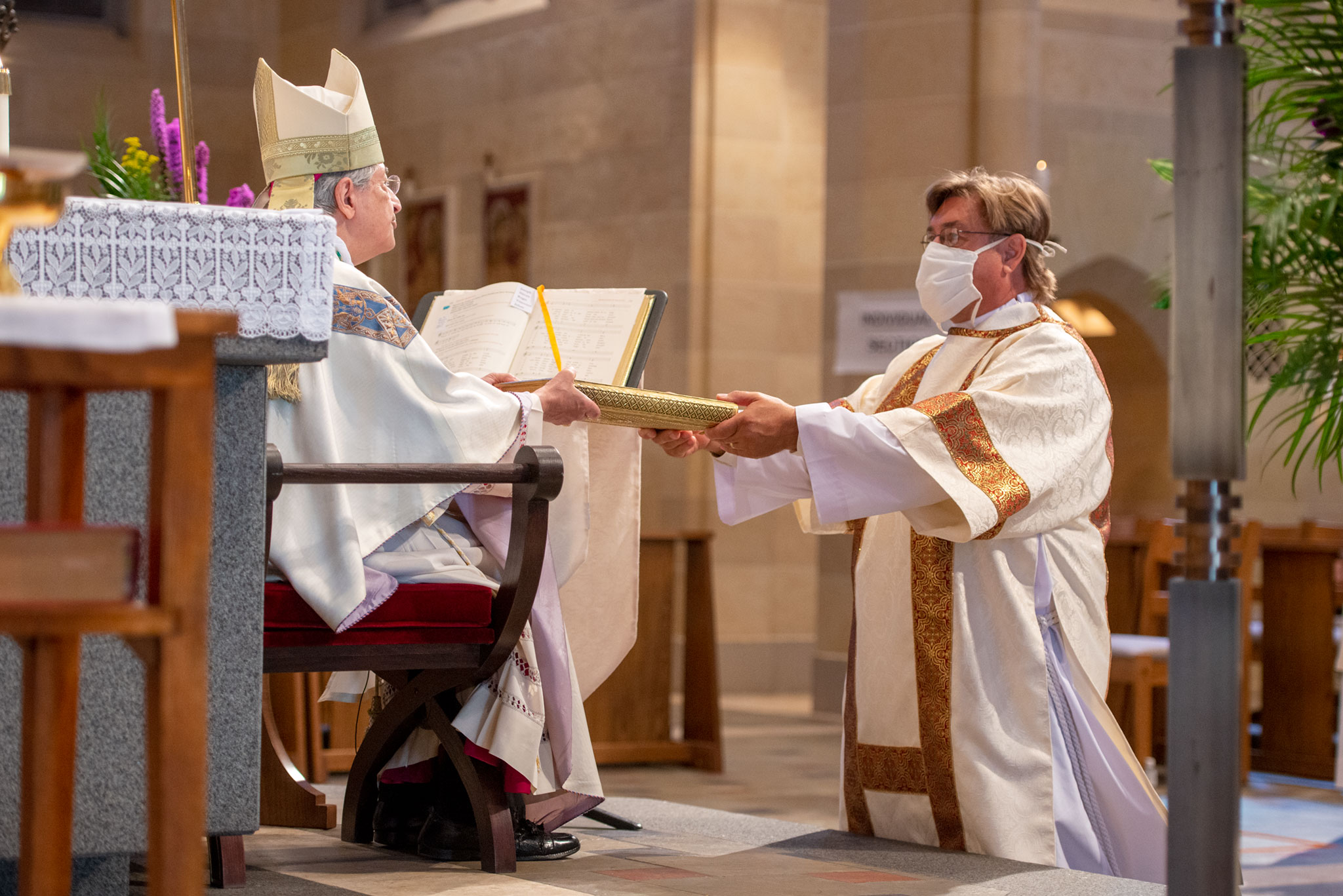 Deacon Johan Engström is presented with the Book of the Gospels.

Back when he was still a youth-ministry intern, acquaintances started asking Deacon Engström if he was planning to become a priest, he recalled. After he got married, they began asking if he was studying for the diaconate, and as he got older, they began asking how he liked being a deacon, said Deacon Engström, who with his wife, Kathleen, attends St. Agnes Parish in Avon.

“Eventually I decided that I better explore whether the people asking were voicing God’s call,” explained Engström, who has five children.

Deacon Engström has been assigned by Bishop Matano to minister at St. Pius Tenth Parish in Chili. He views his entrance into the permanent diaconate as a time “to celebrate service, living a life of service.” He added that he’s looking forward to receiving “the strength and the grace from God to be able to serve him.” 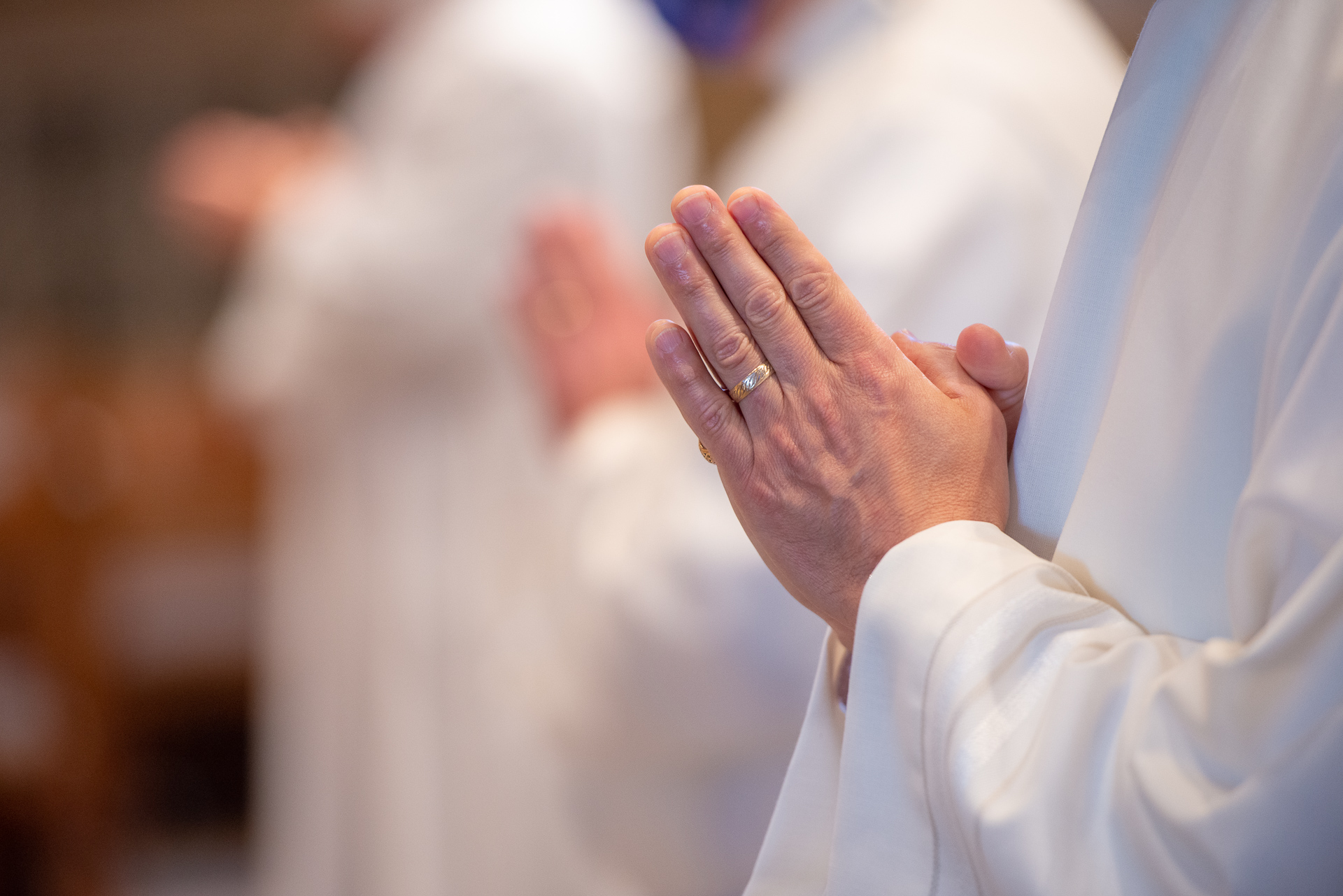 Deacon Vincenzo “Vince” Franco, 54, said his calling to the diaconate took him by surprise, despite the fact that he is a lifelong Catholic.

Deacon Franco grew up in Gates and graduated from Cardinal Mooney High School before earning a degree in chemistry from Rochester Institute of Technology. He served in the U.S. Navy as a nuclear power officer for five years, most of which was spent aboard the USS Bainbridge guided missile cruiser.

Deacon Franco and his wife, Ellen, have two sons — Christopher and Nicholas — and attend St. Pius Tenth Parish in Chili. Deacon Franco said he had been involved with baptism-preparation and music ministries at St. Pius for some time, but never felt called to further ministry until about five years ago.

At that time, a random conversation with coworkers about charity work reminded Deacon Franco that an informational meeting about the diaconate was taking place that evening. Deacon Franco had never seriously contemplated this vocation but felt a strong sense that he should attend the meeting nonetheless. 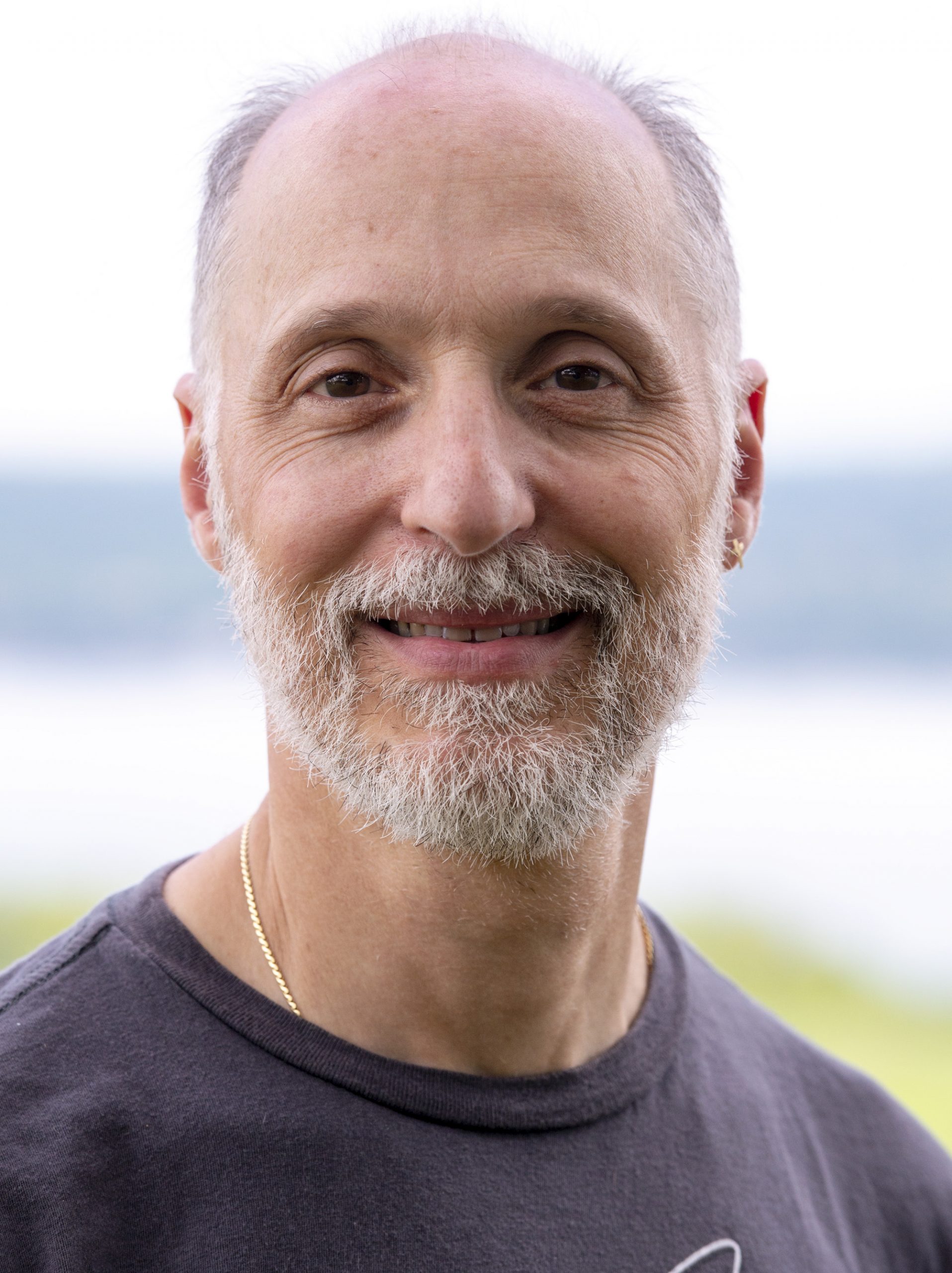 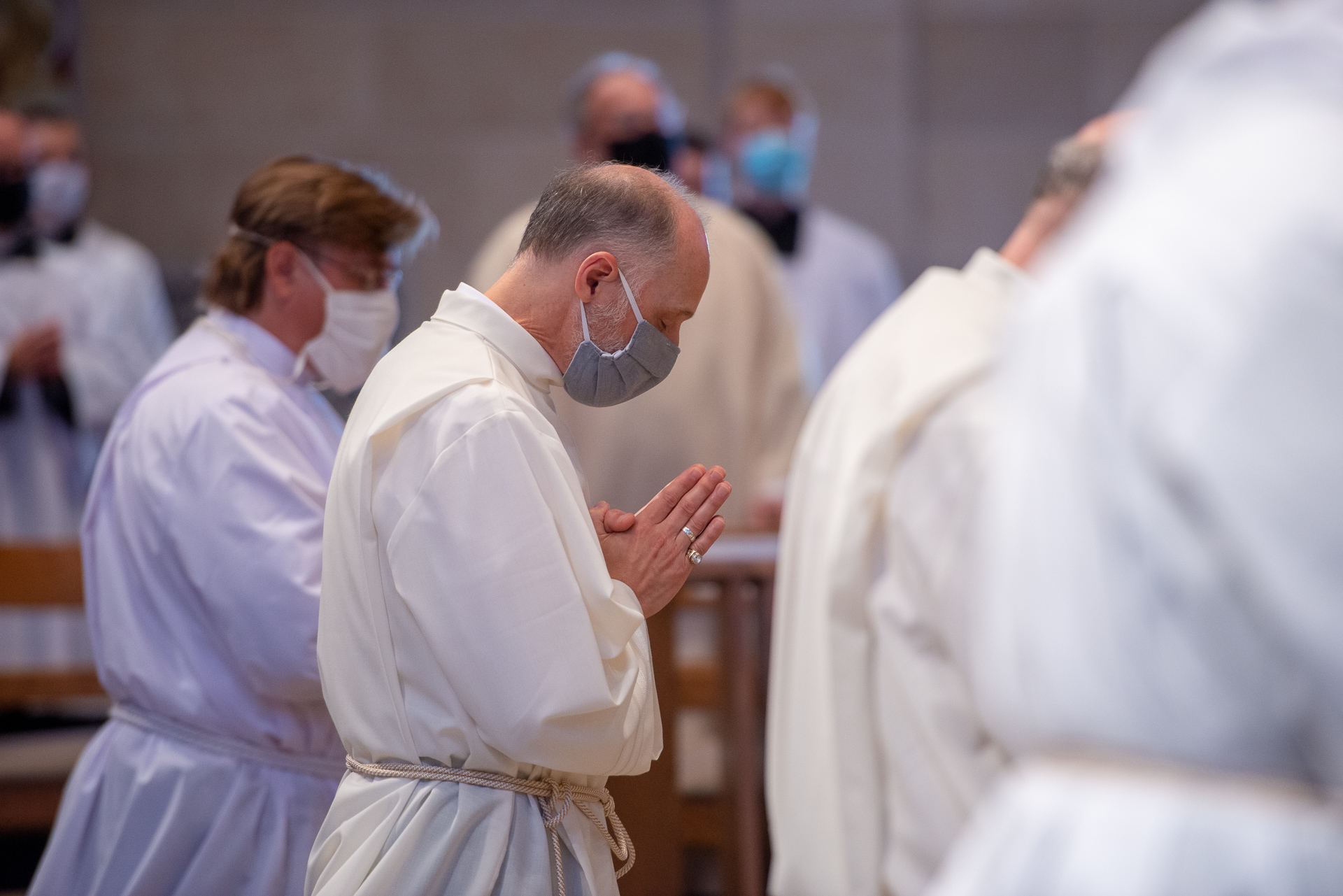 Vincenzo Franco kneels before the altar. 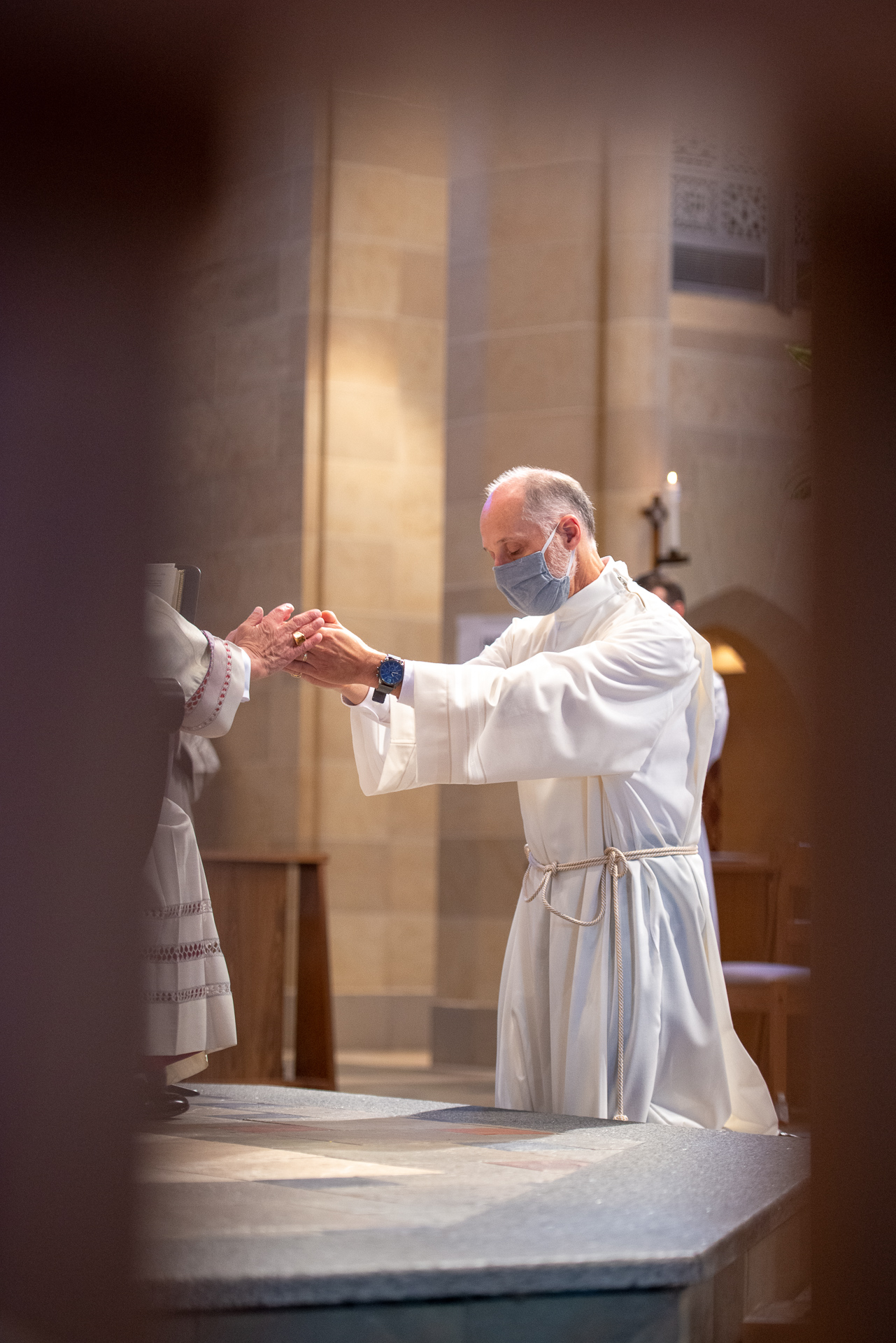 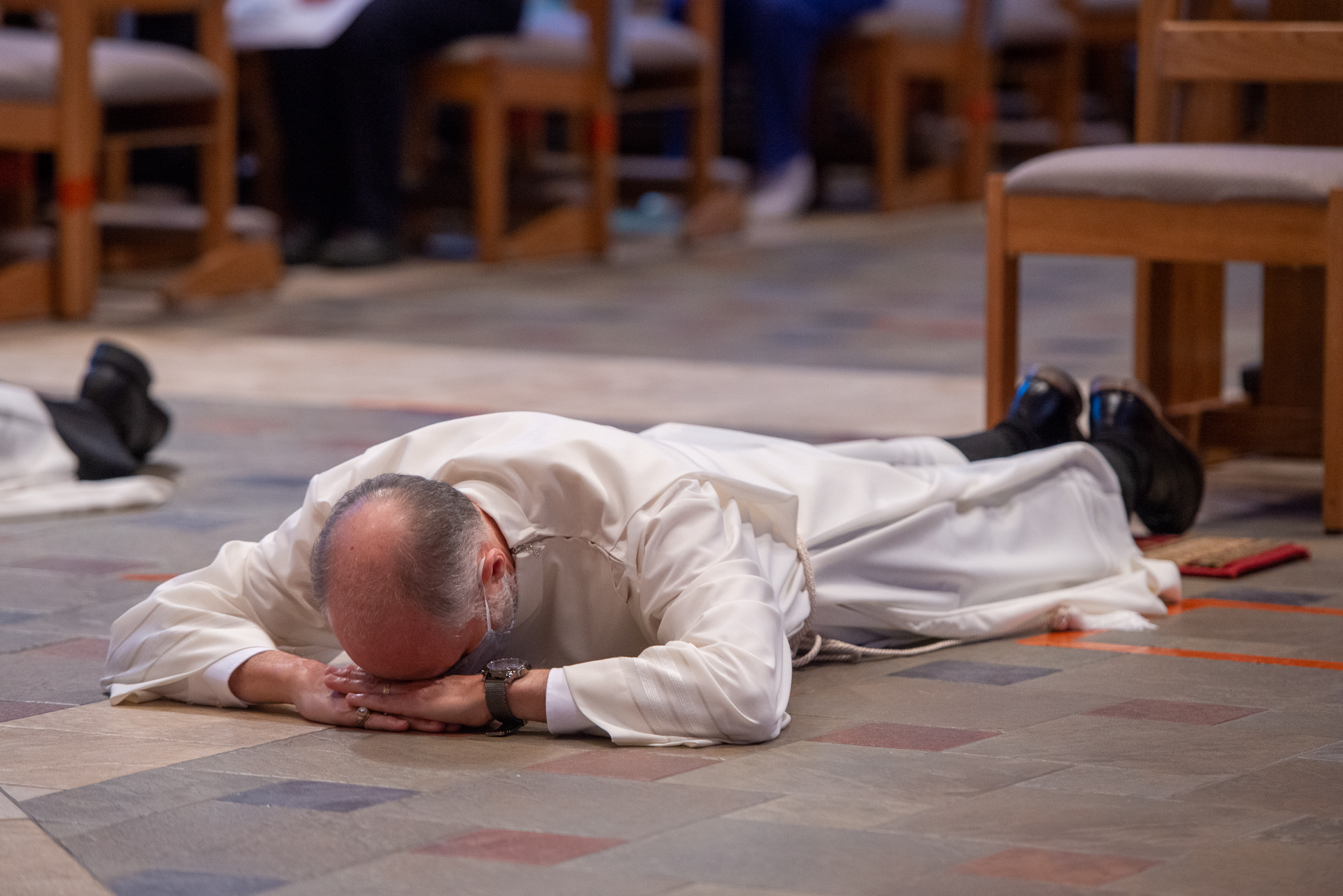 Vincenzo Franco prostrates himself before the altar.

“After attending that meeting, I was confident that the Spirit wanted me to start down that path,” Franco said. “My journey on the path to ordination has only strengthened my knowledge that I am indeed being called to this ministry.”

Deacon Franco, who has been assigned to Nativity of the Blessed Virgin Mary Parish in Brockport, said he’s looking forward to “just getting started in ministry, and just really trying to discern what it is God wants from me in being a deacon, and the ministries he wants me to be involved in.”

“It’s really exciting for me, and I kind of can’t wait,” added Deacon Franco. 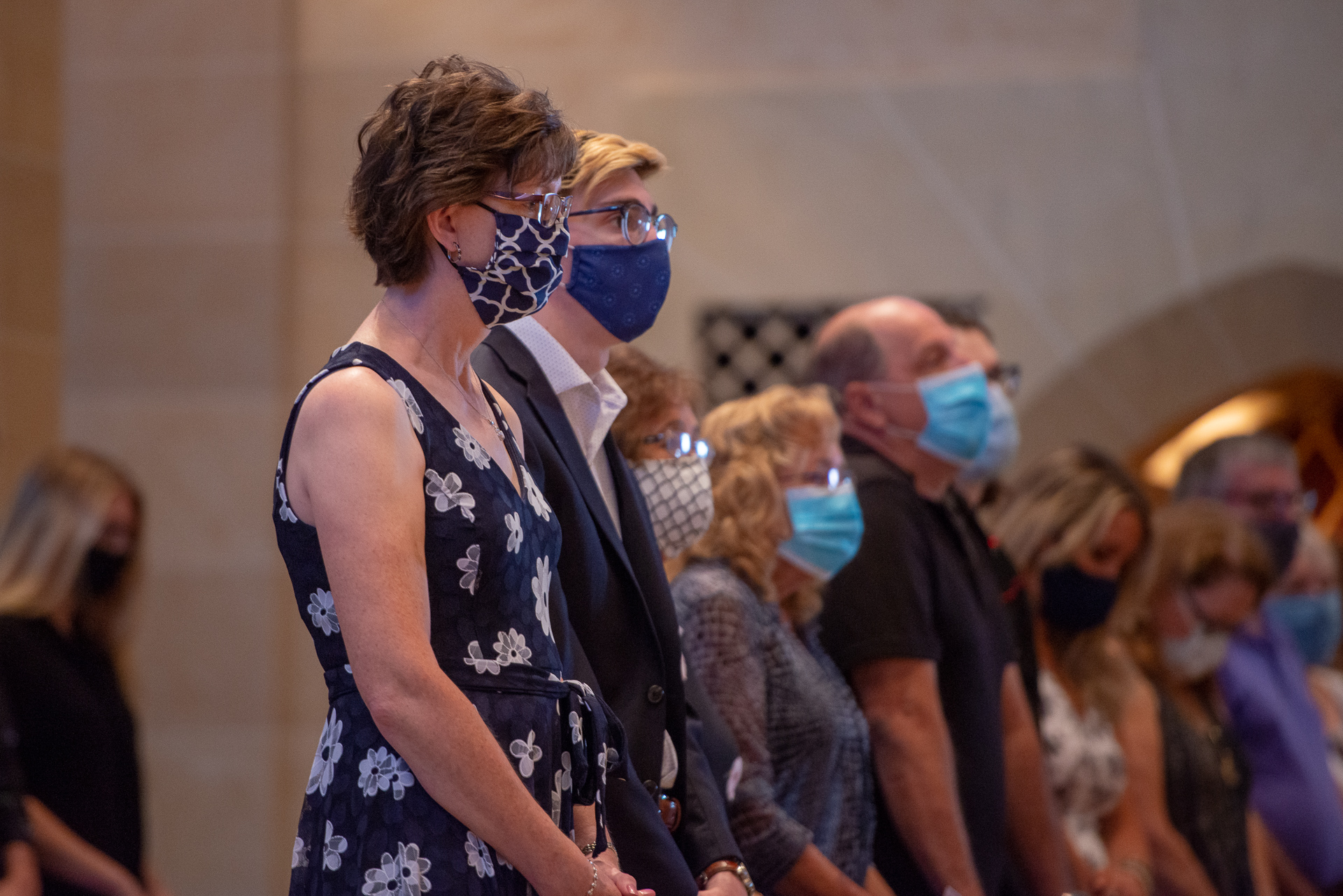 The family of Vincenzo Franco stands during the Mass.

First image: Newly ordained deacons prostrate themselves before the altar. Second image: Bishop Matano welcomes the newly ordained to the Order of Deacons. A physics professor at Alfred University in Allegany County, Roger Loucks, 54 said there wasn’t one specific moment when he suddenly realized he was being called to pursue a vocation as a permanent deacon.

“My interest in the diaconate was quite slow. … Bit by bit I started feeling called to the diaconate,” said Loucks.

He grew up in Avoca, Steuben County, and after high school studied physics and math at Houghton College in Allegany County. After graduating from Houghton, Loucks went to graduate school at the University of Illinois at Urbana-Champaign, where he studied theoretical nuclear physics and earned his doctorate in physics.

He converted to Catholicism in 1996, while in Illinois. He taught at Creighton University, a Jesuit university in Omaha, Neb., for three years before returning to New York in 2002 to teach at Alfred University.

Loucks, his wife, Catherine, and their daughter, Sarah, belong to Our Lady of the Lakes Catholic Community, which has worship sites in Prattsburgh, Penn Yan and Naples. He has served in a number of roles in the parish, including catechist, lector, extraordinary minister of holy Communion and temporary religious-education director, and said all of those experiences helped him discern his vocation as a deacon. 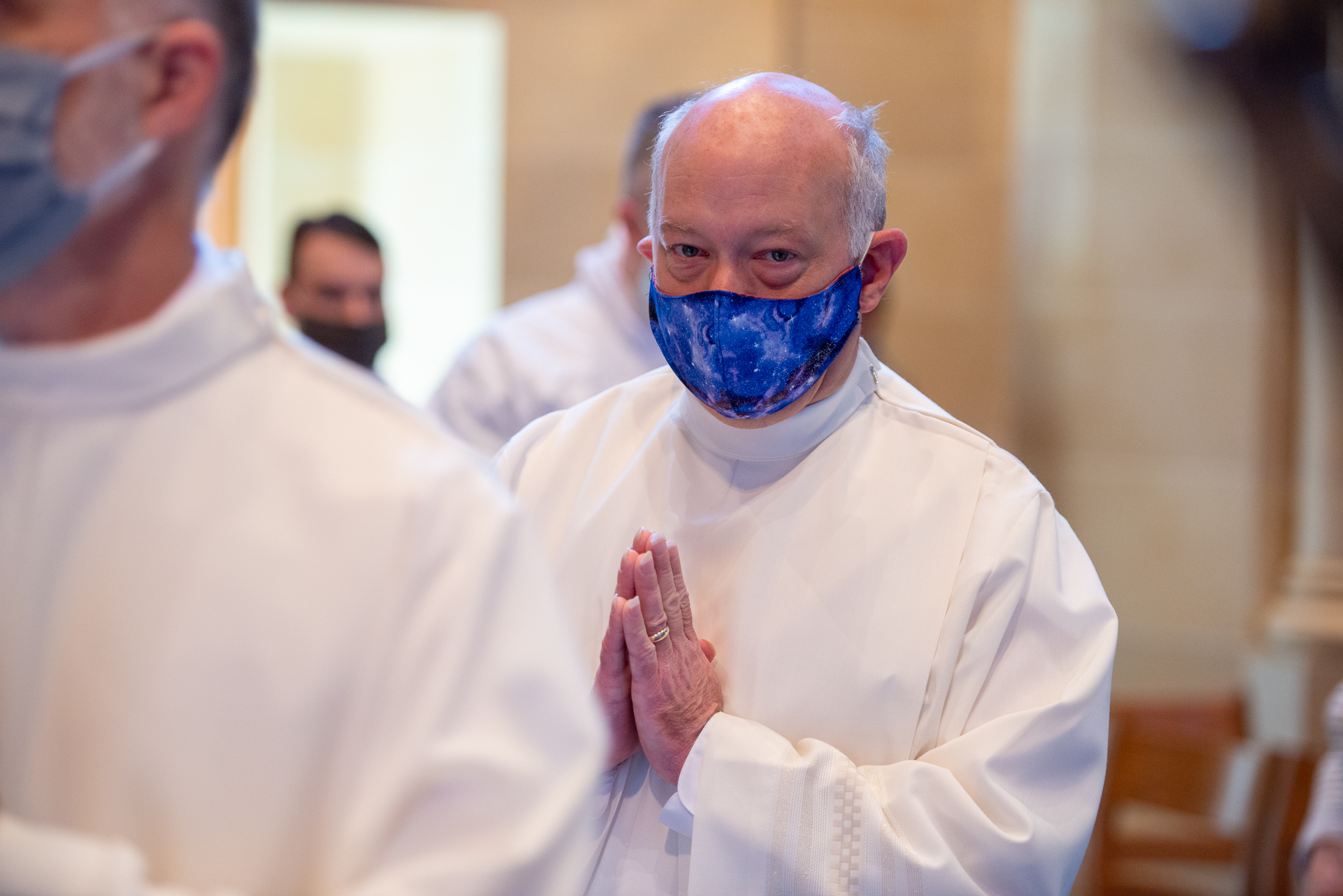 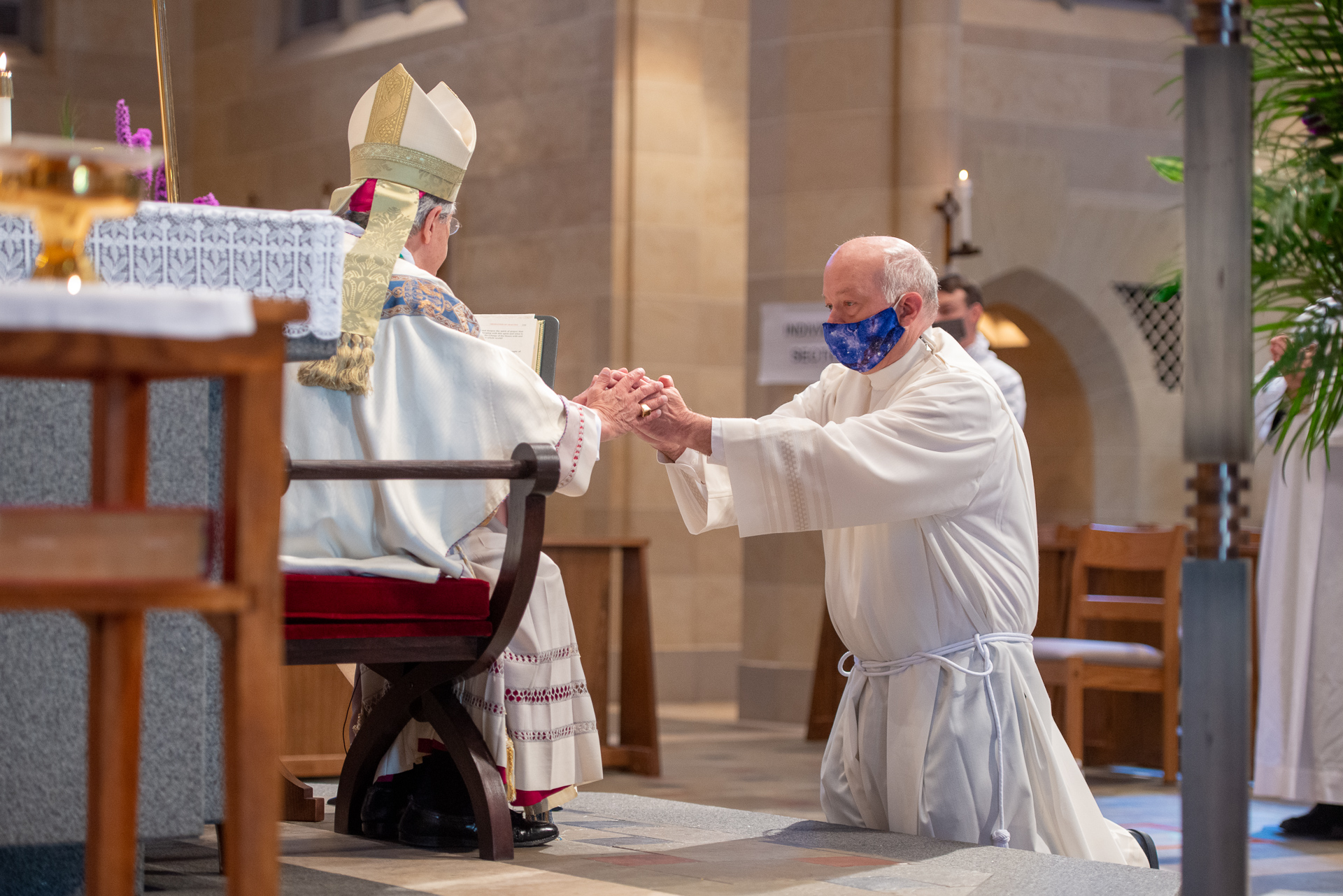 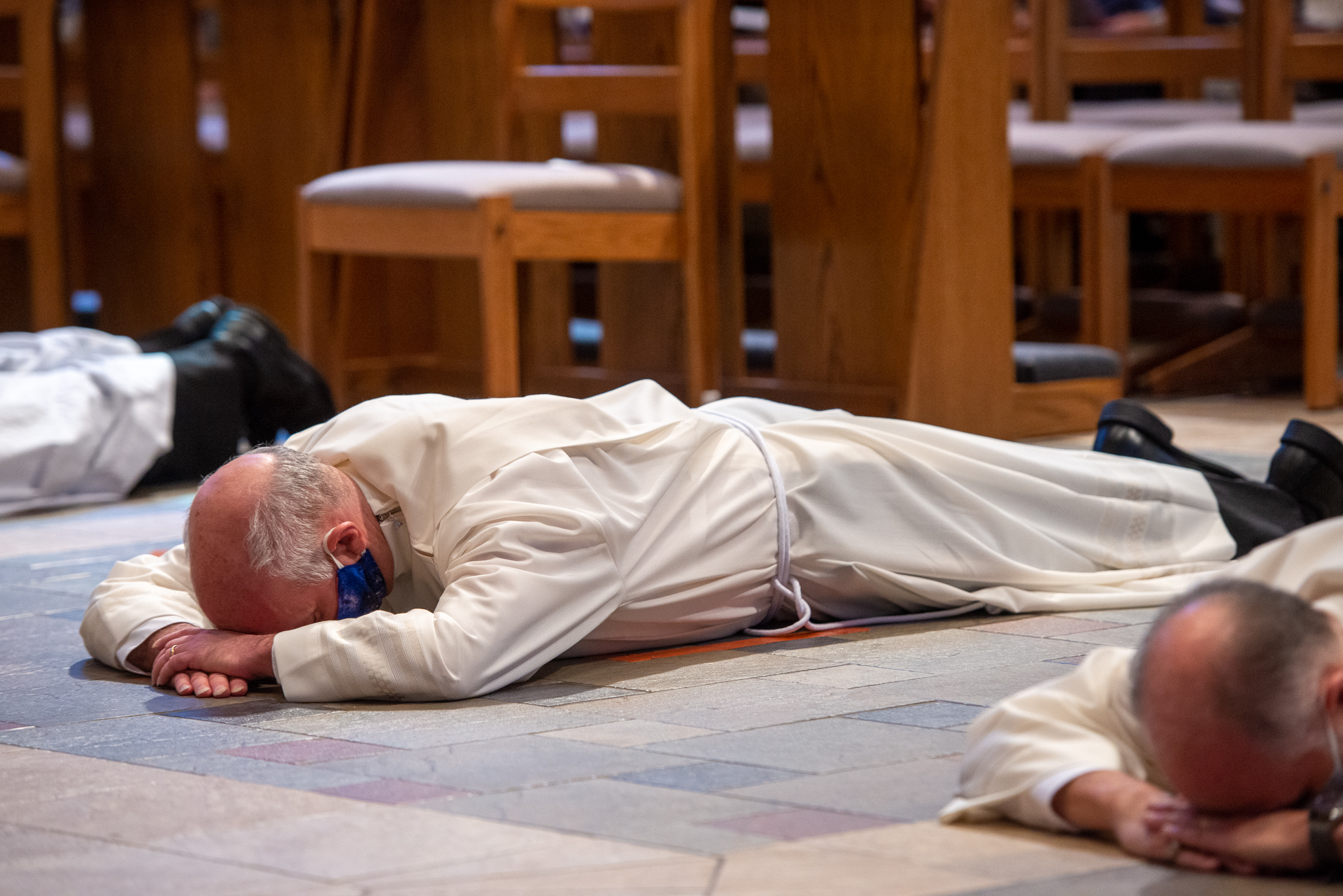 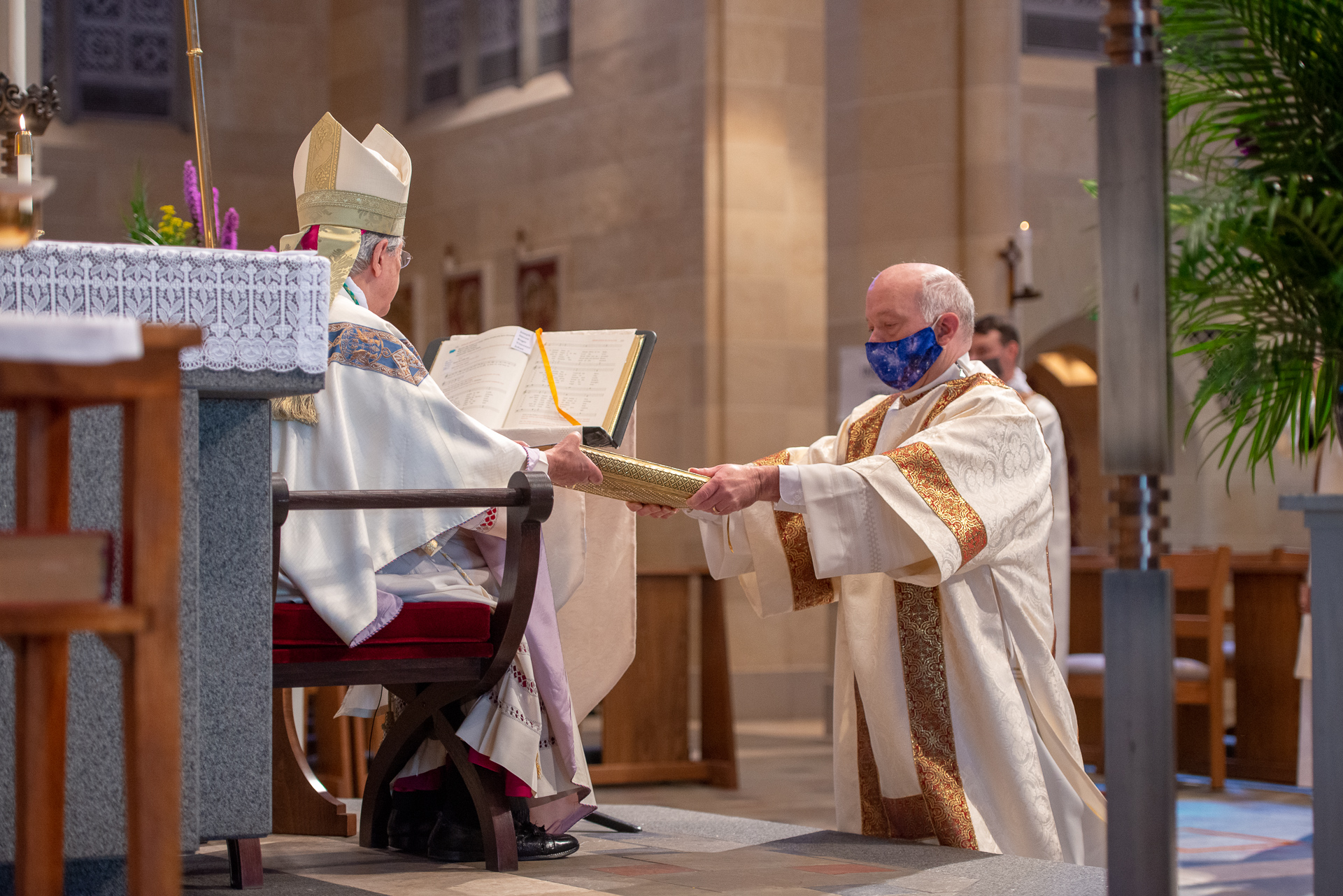 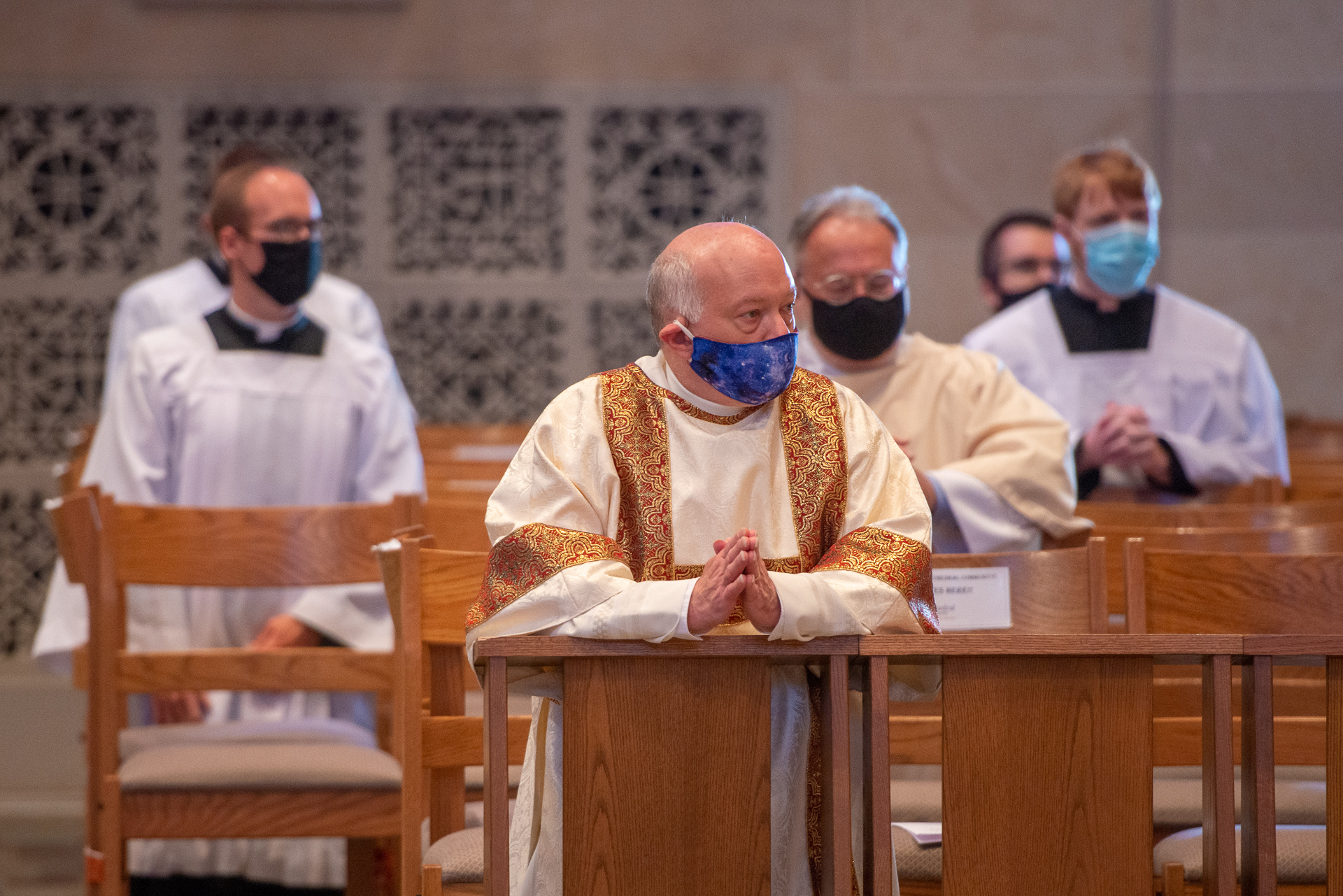 Photo gallery: Roger Loucks processes into Sacred Heart Cathedral; Loucks pledges his obedience to Bishop Matano; Loucks prostrates himself before the altar; Deacon Loucks is presented with the Book of the Gospels; Deacon Loucks kneels during the Liturgy of the Eucharist.

Deacon Loucks will minister at his home parish of Our Lady of the Lakes Catholic Community in the Finger Lakes. He said that he’s eager to now be “putting what I learned into action. To be a deacon means to be a servant, and I really want to actually serve and help.”

Deacon Loucks added that he not only looks forward to the future, but also has cherished his formation process: “I’ve liked working with my deacon candidate brothers. I’ll miss that part — that part I don’t really want to end.”

In the weeks before their Aug. 15 ordination, Johan Engström, Vincenzo Franco, Steven Lewis, Roger Loucks and Joseph Maurici shared with the Catholic Courier their thoughts on becoming deacons. 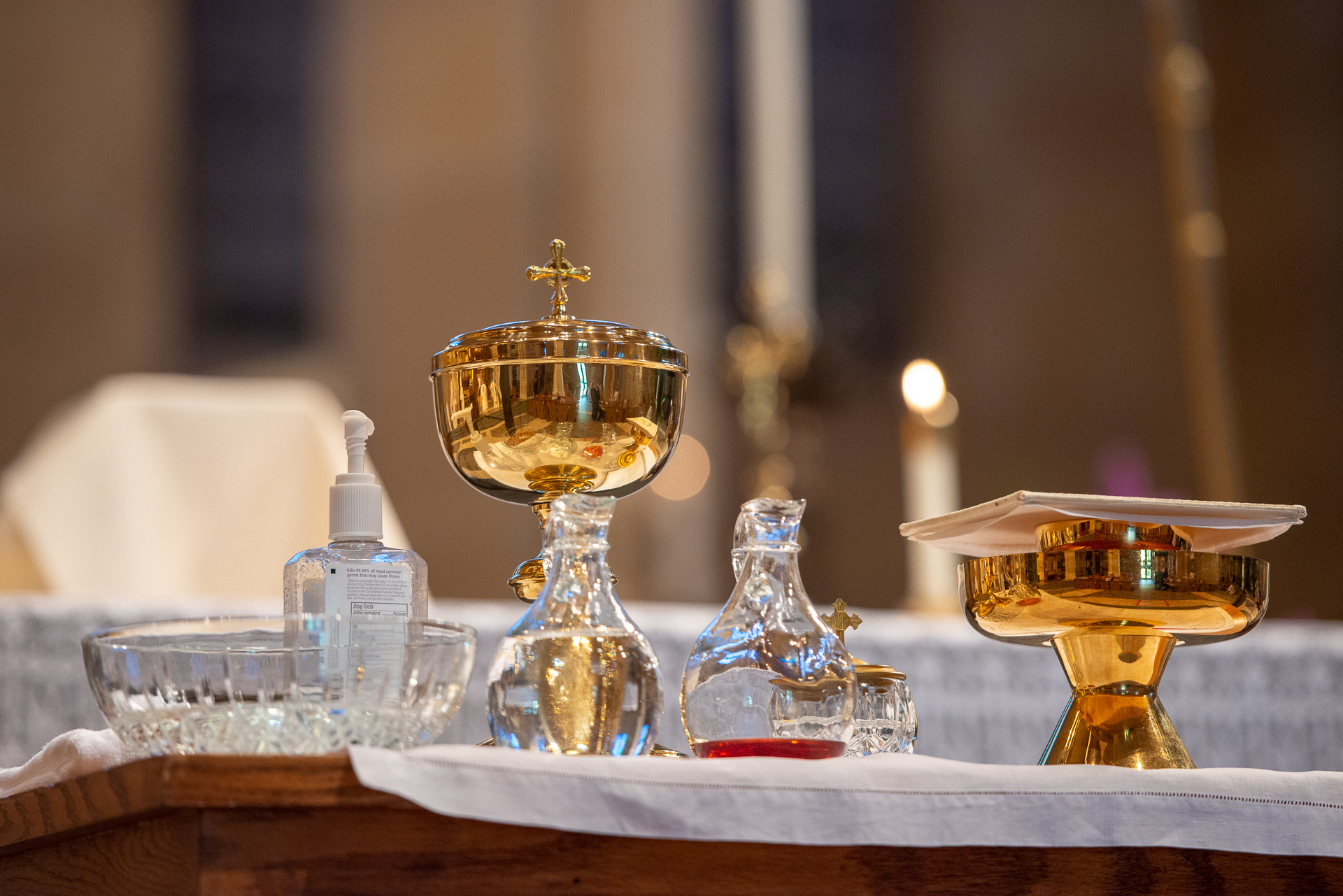 Offerings of bread and wine wait near the altar.

The scheduling of the diaconal ordination on Aug. 15, the feast of the Assumption of Mary, is especially significant for Joseph Maurici, who will be be ordained a transitional deacon. Maurici, 34, who is on track for ordination to the priesthood in the spring of 2021, grew up attending St. Mary of the Assumption Parish in Scottsville.

After high school, Maurici earned a bachelor’s degree from Mercyhurst College in Erie, Pa., and worked for discount retailer Dollar General for six years. During that time, he was a frequent participant at the Diocese of Rochester’s Theology on Tap gatherings for young adults. He began discerning his vocation shortly after attending a diocesan-sponsored dinner for men who were curious about the priesthood.

“It was a few days later when I kind of got a very clear (message), this is where you’re supposed to be. It was very profound,” Maurici recalled.

In 2014, Maurici entered the diocesan pre-theology program for men discerning priestly vocations and in 2015 began studying at St. John’s Seminary in Boston, Mass. He will return to the seminary in the fall for his final year of study before ordination. 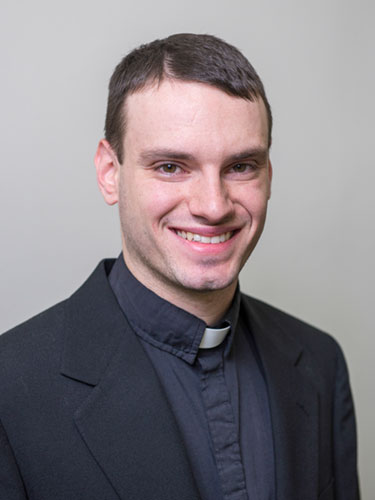 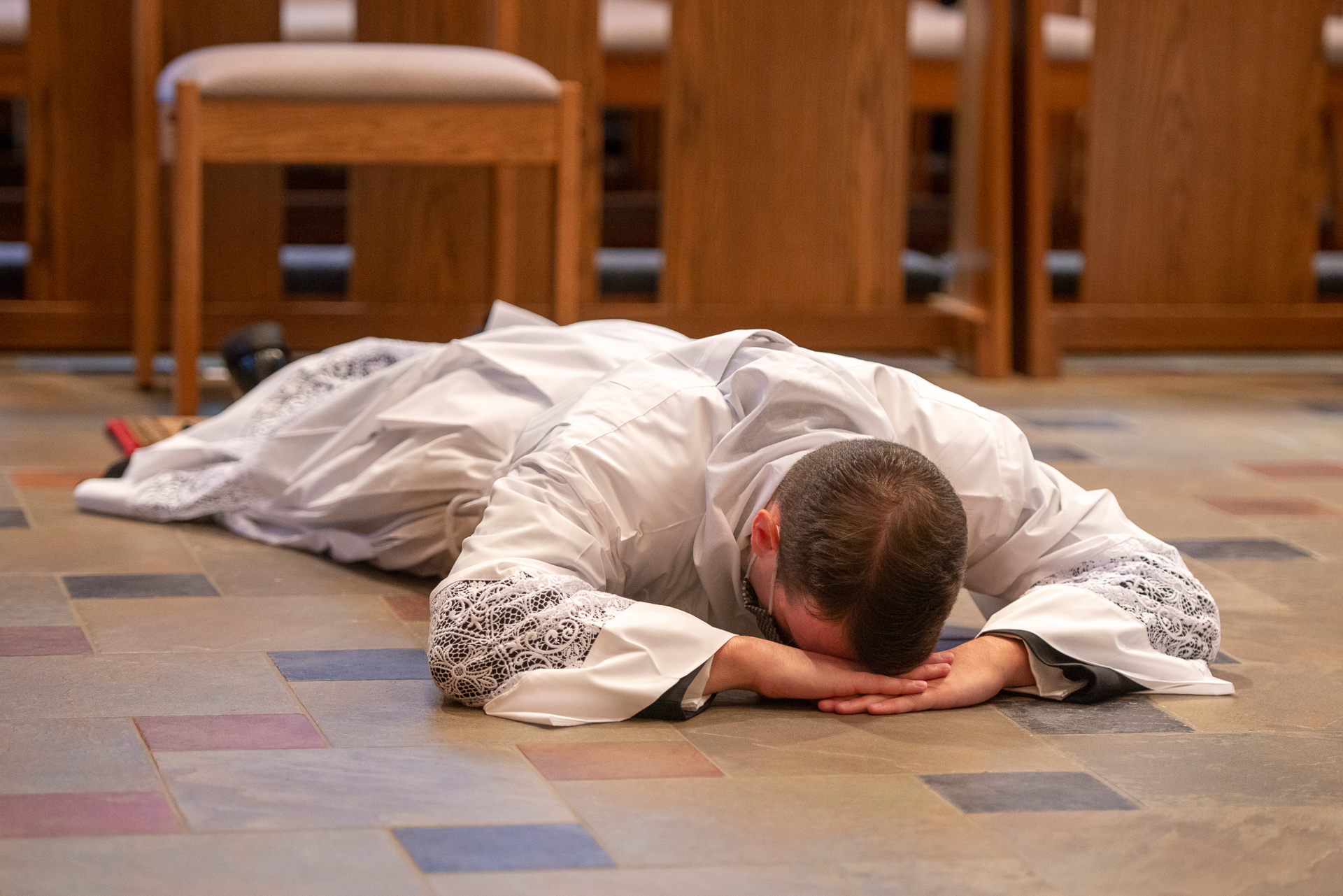 Joseph Maurici prostrates himself before the altar. 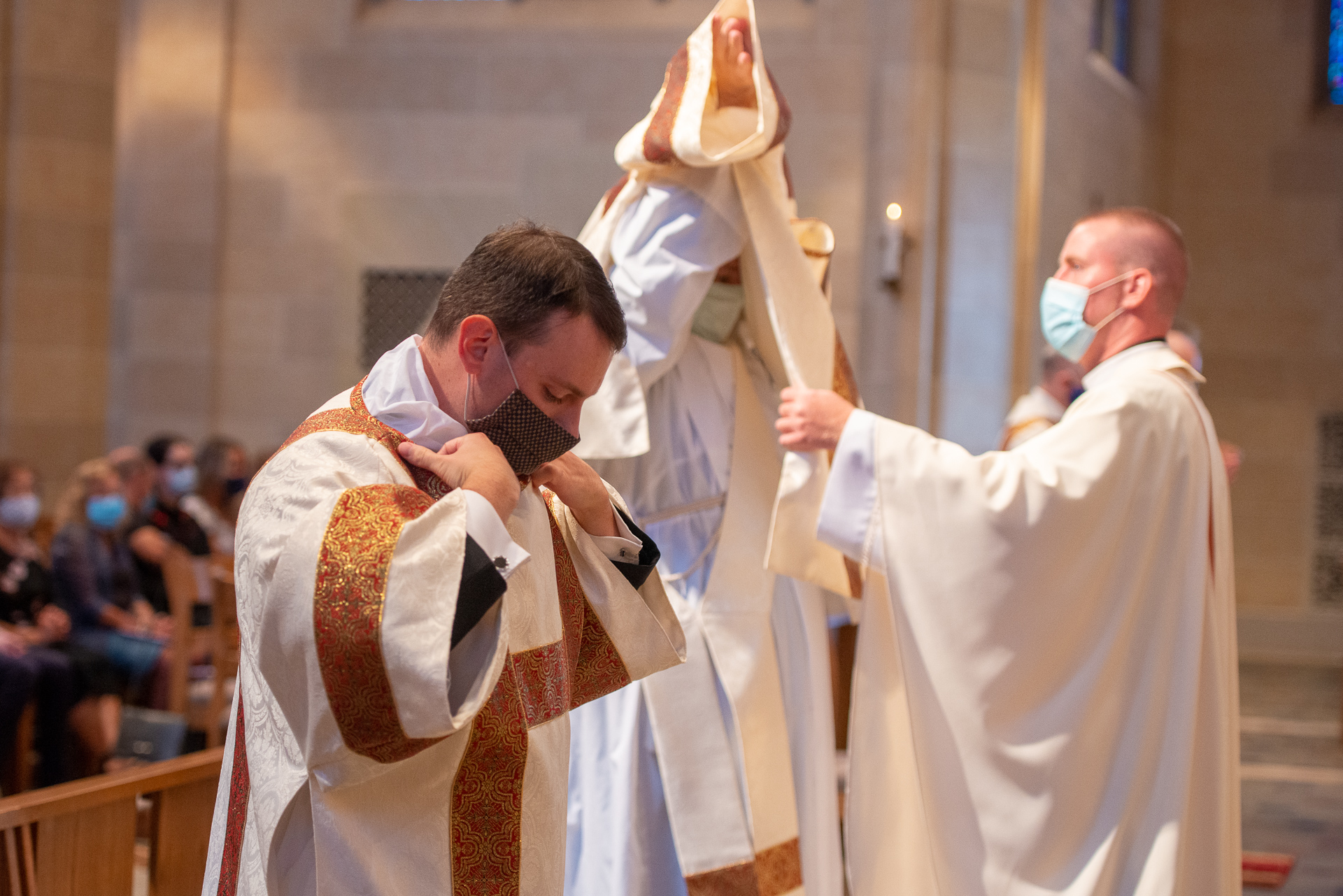 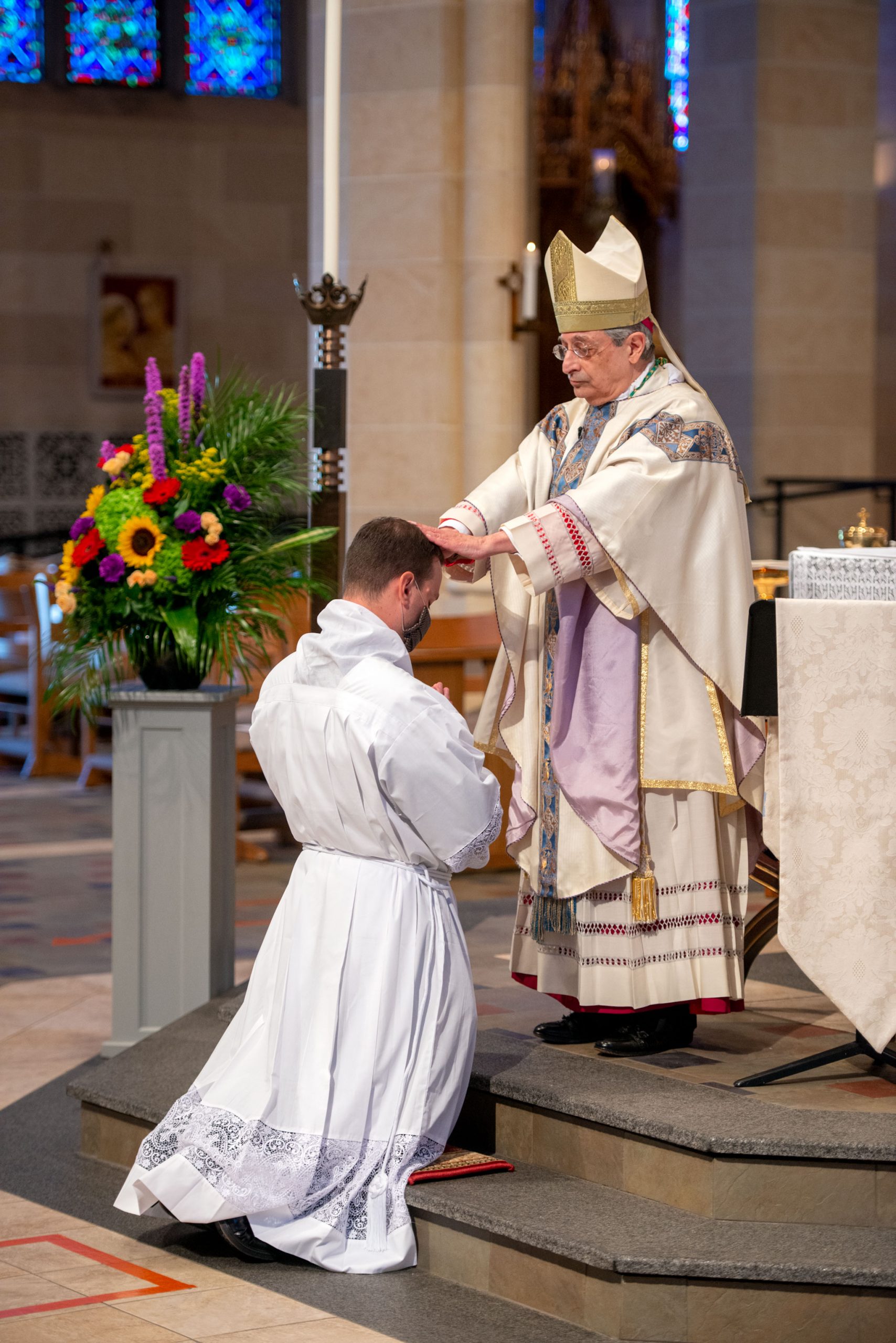 Bishop Matano places his hands on the head of Joseph Maurici.

Deacon Maurici remarked that he’s excited to have now acquired “this very well-defined role in the church as I continue to prepare for priesthood ordination. It’s really kind of an amazing feeling.” 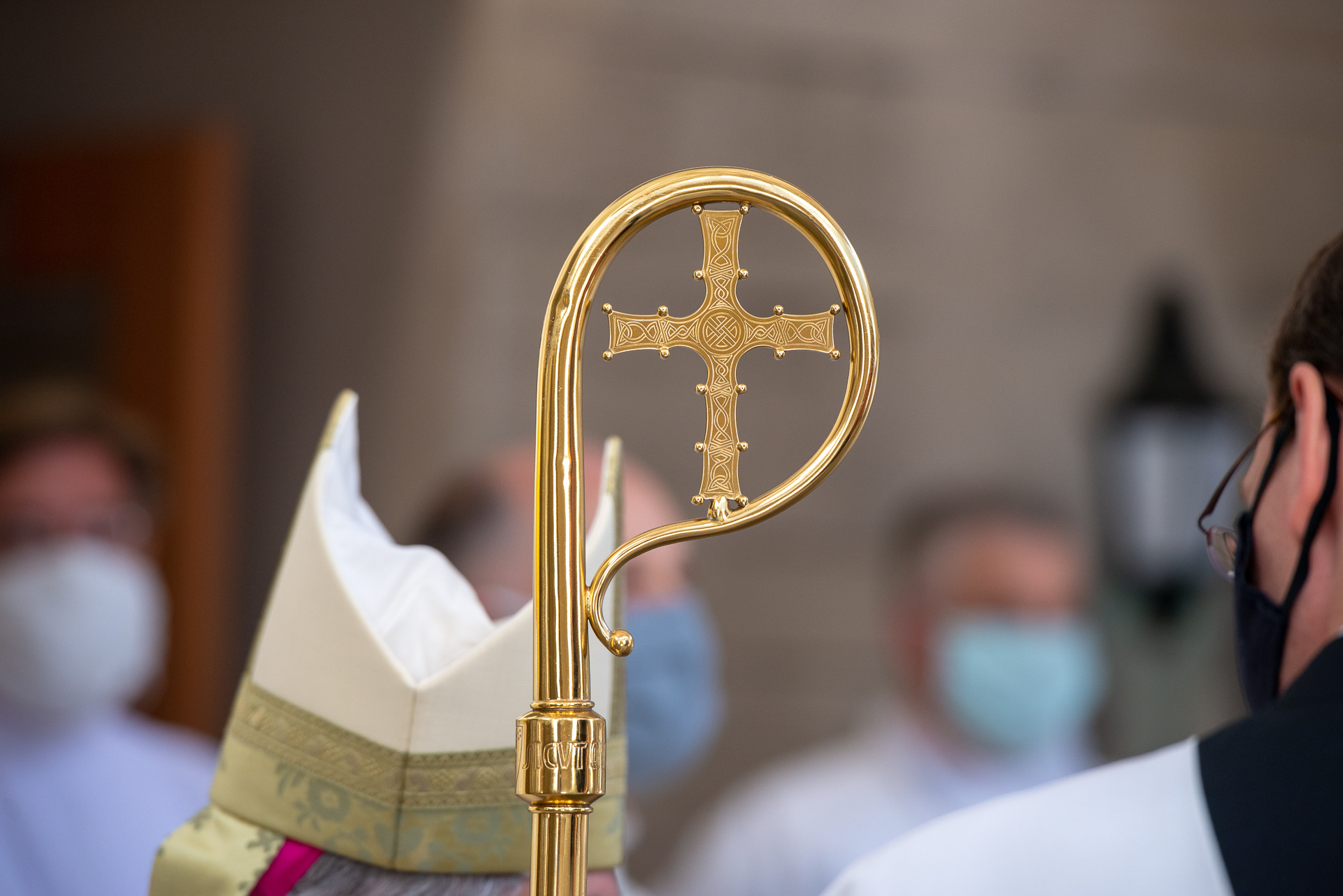 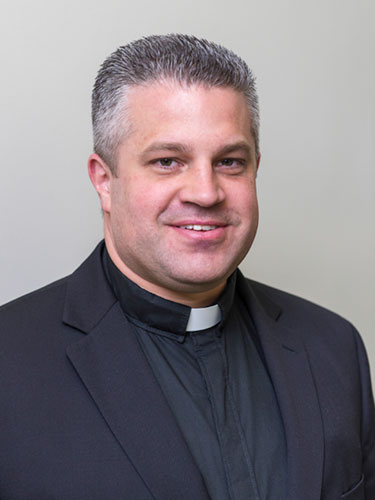 Fellow seminarian Steven Lewis was also ordained a transitional deacon Aug. 15 and will be ordained to the priesthood in spring 2021. He likewise noted the significance of the Aug. 15 ordination date.

“The feast of the Assumption is an important day in my life,” remarked Lewis, who grew up attending Immaculate Conception Parish in the Town of Greene in Chenango County.

Lewis arrived in the Rochester area in 1996 when he began his studies at the University of Rochester. He majored in mathematics and computer science, graduated in 1996 and earned a master’s in public administration from SUNY Brockport in 2006.

He worked in information technology at SUNY Brockport from 2000 until Aug. 15, 2014, when he left to enter the pre-theology program at Becket Hall.

Lewis had considered entering the seminary after high school but opted to go to college instead. By 2002, he had a stable job and owned a home, but when his television broke and he began to spend more time in prayer, he learned more about himself. 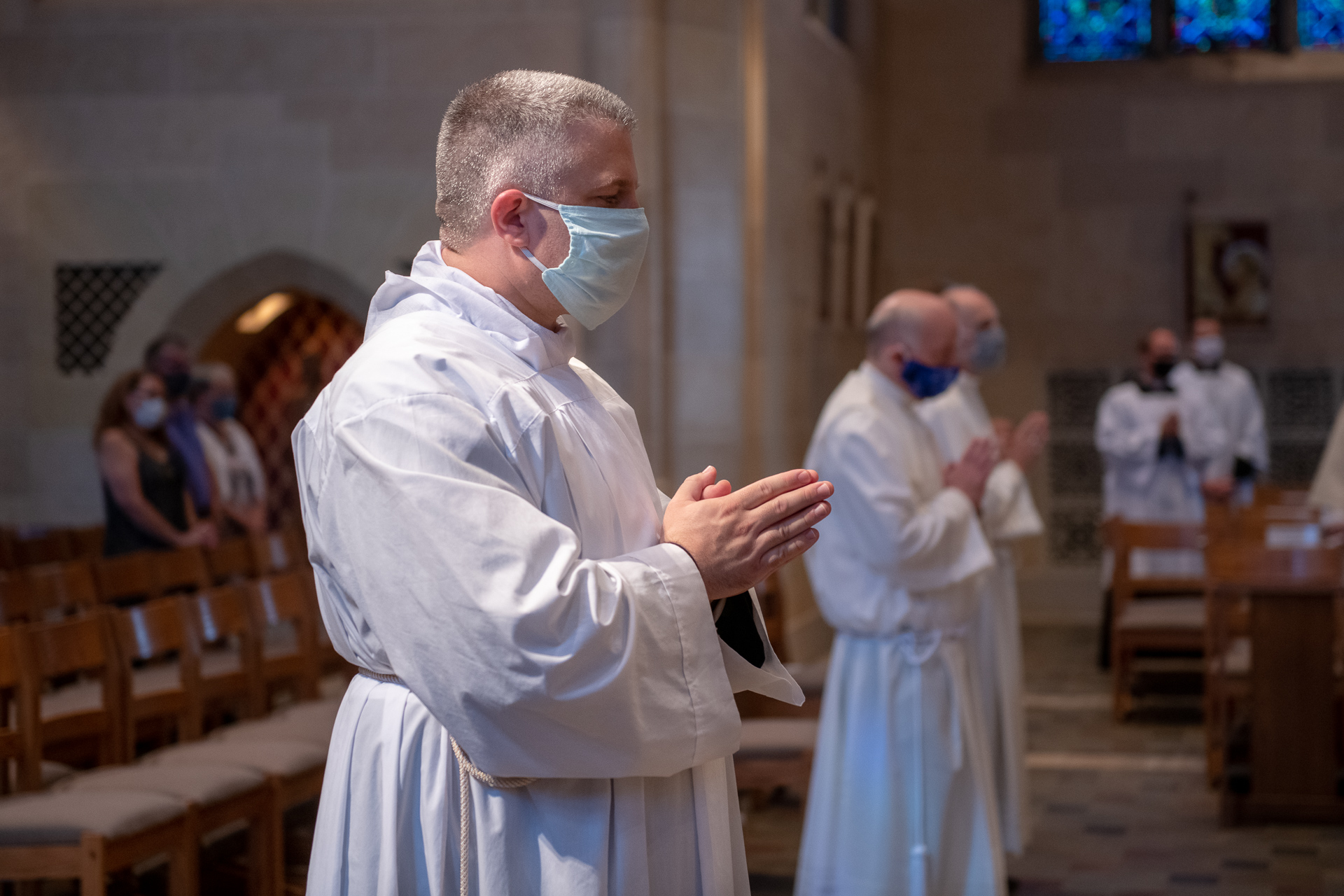 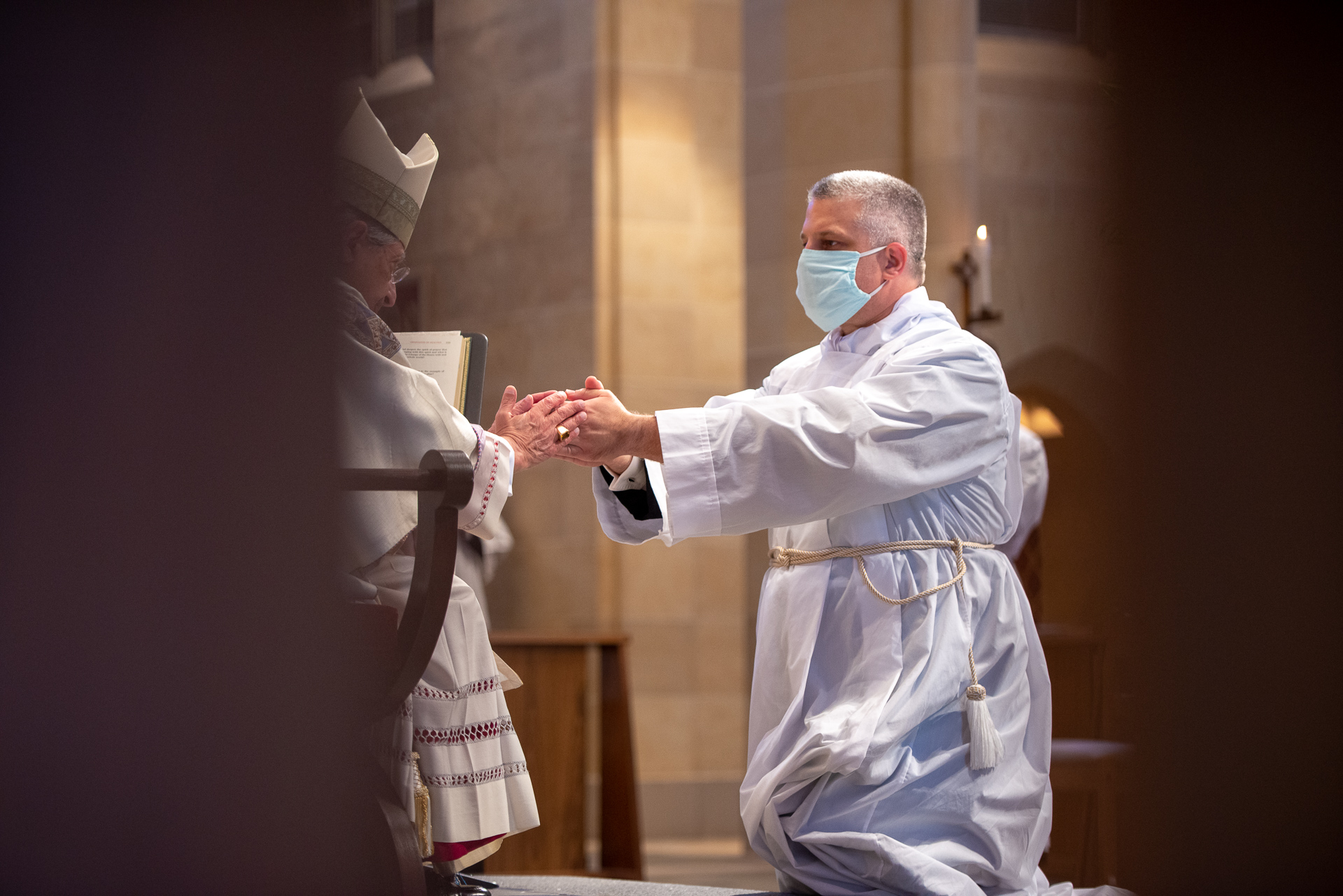 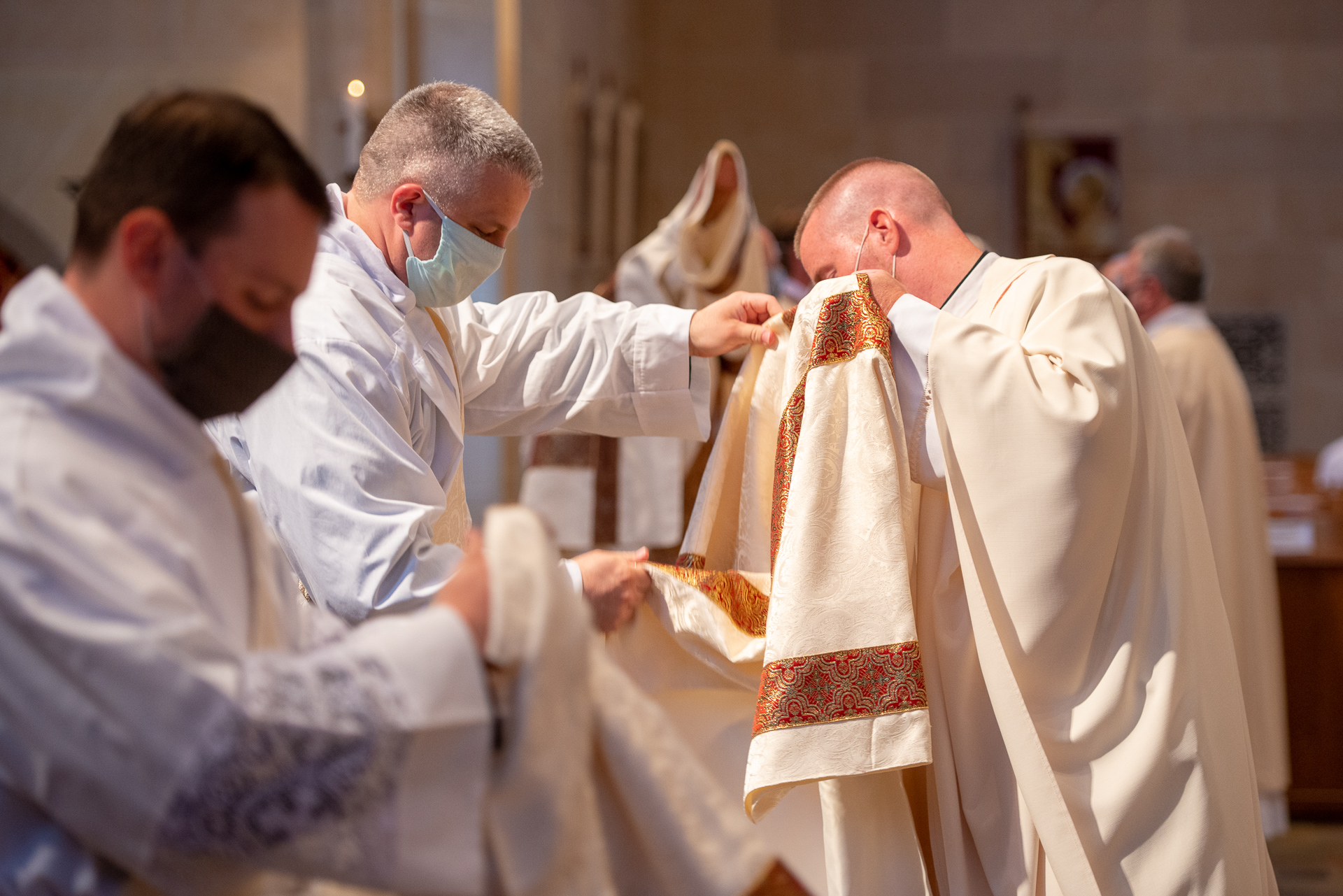 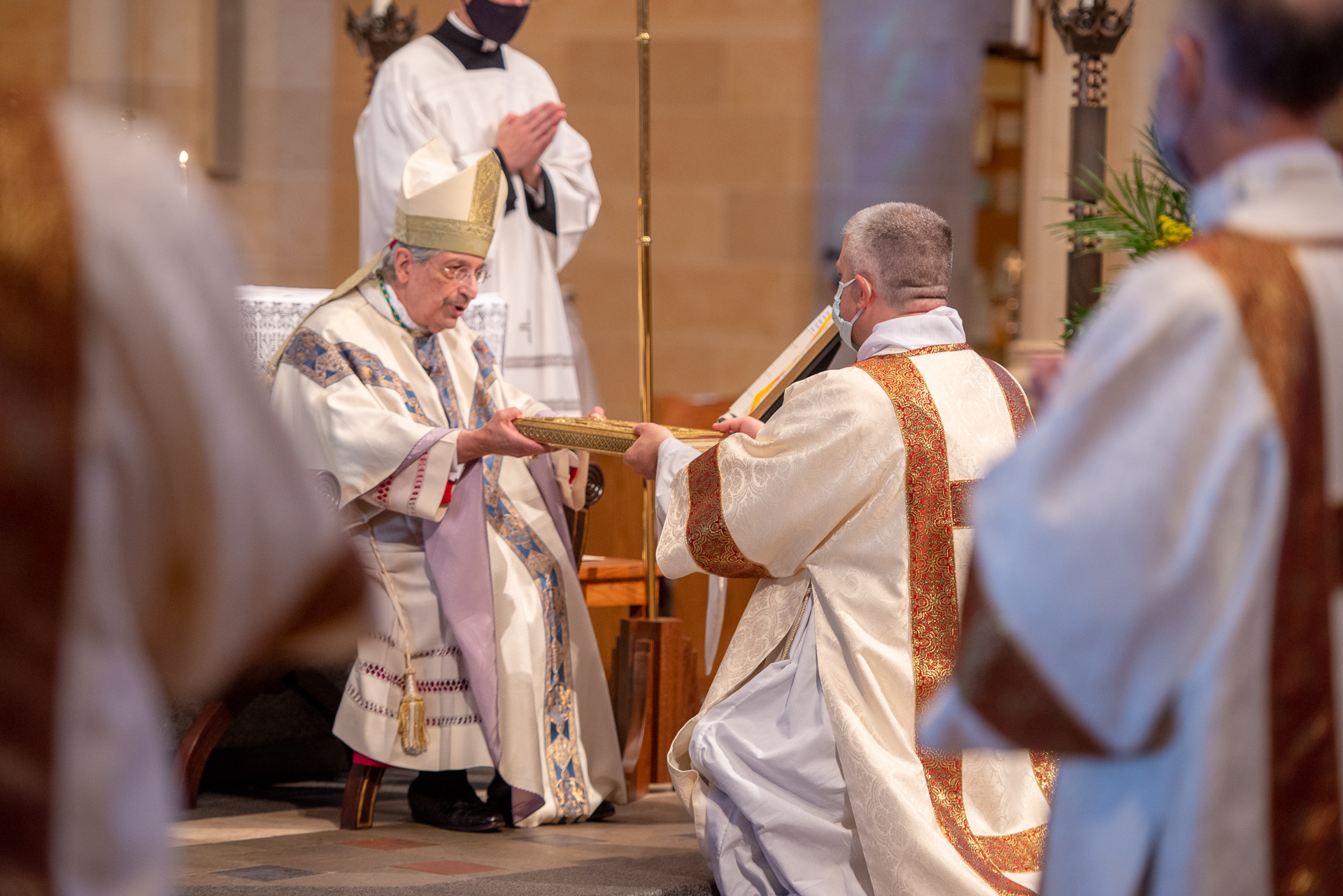 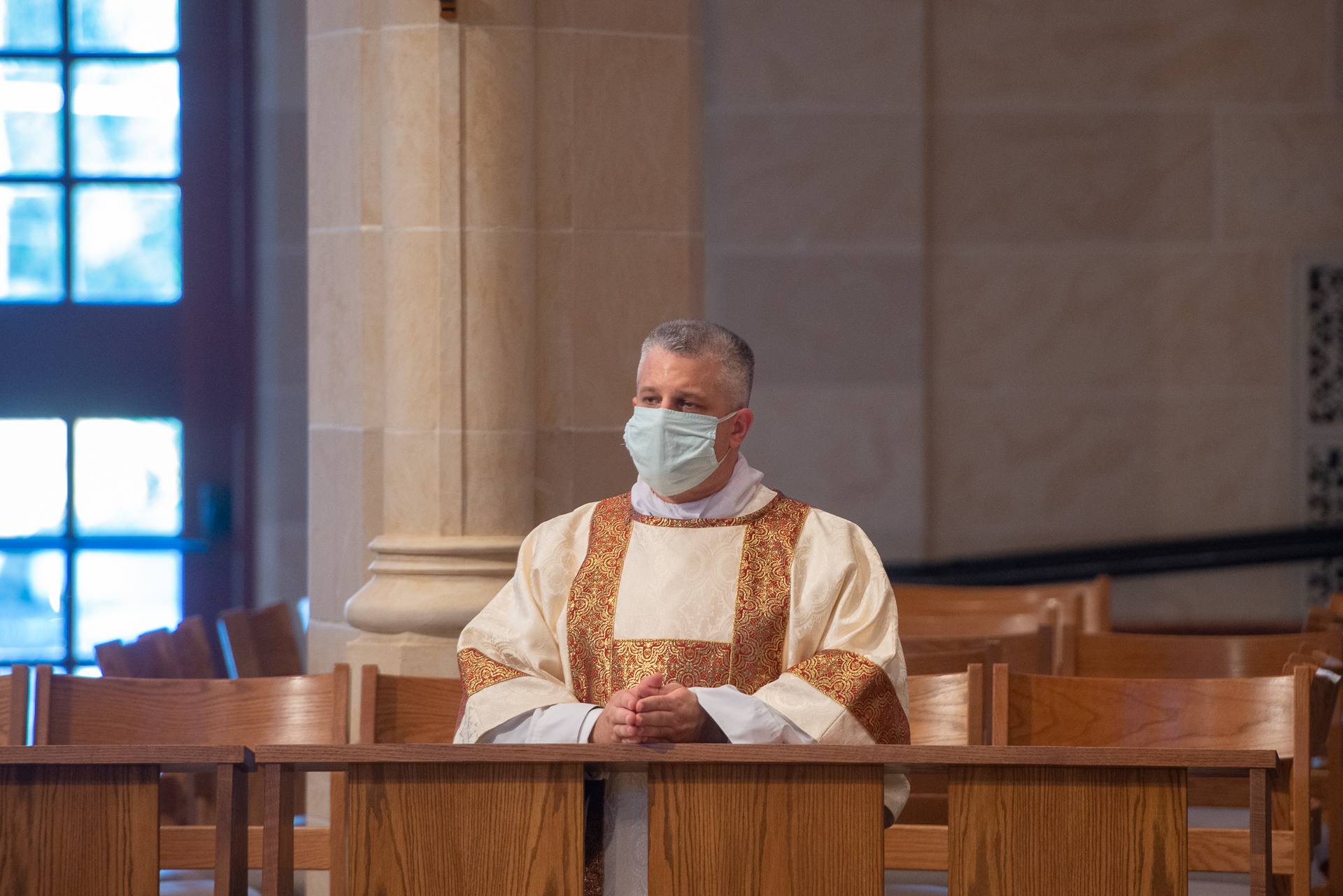 Photo gallery: Steven Lewis stands before the altar after the procession; Lewis pledges his obedience to Bishop Matano; Deacon Lewis is vested; Deacon Lewis is presented with the Book of the Gospels; Deacon Lewis kneels during the Liturgy of the Eucharist.

“I came to experience more acutely the dissatisfaction with a stable, comfortable, well-paid professional life and hear the call to serve as a priest. Serving Holy Mass was not enough. I was asked to give more. Eventually, ‘no’ was no longer an answer I could live with,” Lewis explained.

Like Maurici, Lewis has been studying at St. John’s Seminary and will return for his final year of study in the fall. He considers the Latin Mass community at St. Kateri Tekakwitha Parish in Irondequoit to be his spiritual home, and while in the Rochester area recently he has lived in community with other priests at St. Charles Borromeo Parish in Greece and St. John the Evangelist Parish in Spencerport. 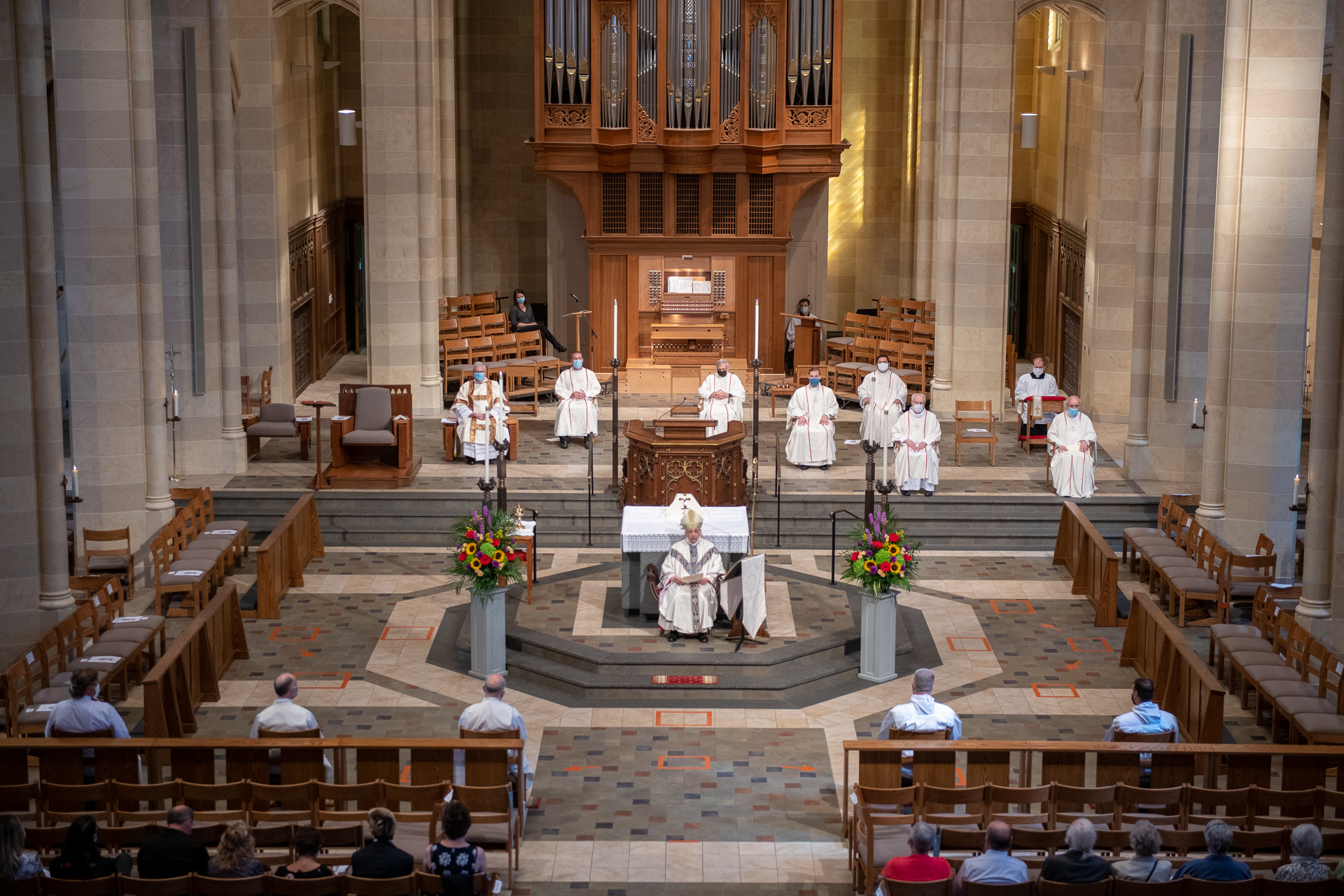 Bishop Matano gives the homily during the diaconal ordination Mass.