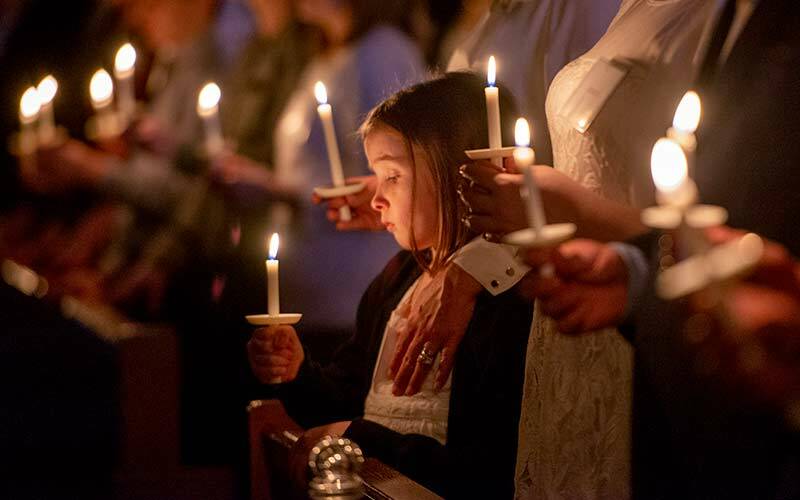 From the end of the Middle Ages through the mid-20th century, Holy Week liturgies were usually performed by clergy “often in deserted halls of churches,” with little or no lay participation.

Then, in November 1955, Pope Pius XII’s decree Maxima Redemptionis shifted the ceremonies to better align with their timing in Scripture, broaden lay participation, and enable the laity to enter more deeply into the experience of Jesus’ passion, death and resurrection.

In the early church, Holy Week liturgies took place in relation to the chronology of biblical events, noted Father Joseph A. Hart. But by the Middle Ages — and particularly in the Western church — many had evolved into morning liturgies of anticipation.

Pope Pius’ decree moved Masses on Holy Thursday and the Easter Vigil from morning to evening and directed that Good Friday liturgies should begin as close as possible to 3 p.m. local time.

These timing changes for Holy Thursday and Good Friday liturgies took effect in 1956. The Easter Vigil Mass had been moved to Holy Saturday evenings on an experimental basis in 1951. The change became permanent in 1956, with Maxima Redemptionis restoring the Vigil Mass to “its proper place during the night” on Holy Saturday, beginning no sooner than sunset.

Pius XII sought to realign the timing of these observances to corresponding events in Scripture. Celebrating the Mass of the Lord’s Supper on Holy Thursday evening, for example, mirrors the Last Supper, which took place at night. Similarly, Maxima Redemptionis stipulated that the Good Friday liturgy should occur at the time when Jesus died on the cross.

“We’ve (now) moved more toward a faithful adaption. This whole trying to line up with the Scriptures, that was not the case prior to 1955,” said Father Hart, who serves as pastor and coadministrator of Brighton’s Our Lady Queen of Peace and St. Thomas More parishes. He has a licentiate as well as a doctorate in sacred theology, and also taught for many years at the former St. Bernard’s Seminary as well as at St. Bernard’s Institute — now known as St. Bernard’s School of Theology and Ministry.

Another goal of Maxima Redemptionis was to broaden Holy Week participation by the faithful. The decree noted that morning liturgies were not only less faithful to Scriptural accounts, but also conflicted with the school and work commitments of many worshippers.

“Common and almost universal experience teaches that these solemn and important liturgical activities of the sacred days are usually performed by clergy, often in deserted halls of churches,” the document observed.

Maxima Redemptionis also encouraged more active lay involvement in Holy Week liturgies. For example, 1956 was the first time congregations renewed their baptismal vows in the vernacular rather than in Latin during the Easter Vigil Mass.

Another nod to widespread participation is allowing the congregation to receive Holy Communion on Good Friday. Previously, only the presiding priest was permitted to receive the Eucharist at the liturgy.

Pius XII’s decree also inserted into the evening Mass on Holy Thursday a ceremony in which the presider washes the feet of several people — most commonly numbering 12 — recalling Jesus washing the feet of his apostles. Previously, the ceremony had been conducted as a separate event after Mass and without the congregation present. In 2016, Pope Francis updated the custom to include women as well as men.

Father Hart observed that the foot-washing ceremony — along with such Holy Week rituals as reciting the Passion, taking part in Stations of the Cross and holding palms on Palm Sunday to mimic crowds waving palms upon Jesus’ entry into Jerusalem — enable the congregation to re-enact rather than merely recall key events of Holy Week.

Inserting themselves so vividly into these historical events, he said, allows the faithful to more deeply appreciate what it must have been like to actually witness them.

“(This type of participation) has kind of joined us, as we gather, with Jesus as we go through his passion and death,” Father Hart remarked.